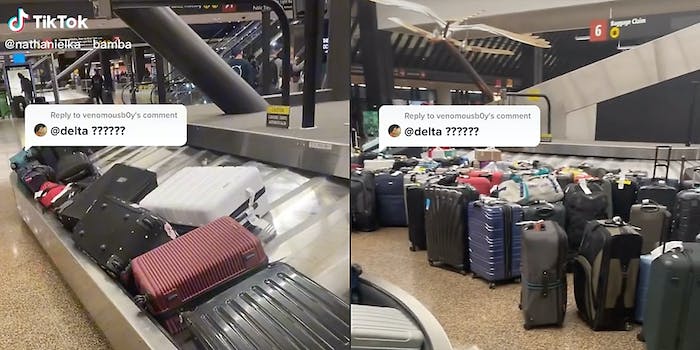 A TikToker is calling out Delta for canceling flights at the last minute and leaving would-be passengers in a bad situation.

@nathanielka__bamba’s video showing an airport where he says he got stranded in the middle of the night has racked up 1.3 million views already. In it, suitcases are filling up the unmoving carousel and crowding the floor at baggage claim, while some of the stranded passengers stand around.

The video was posted as a clarification to an earlier TikTok @nathanielka__bamba shared, criticizing the airline for refusing to cover the cost of a hotel after they canceled his flight.

“[They canceled] my 10 PM flight to LAX 30 minutes before take off due to a ‘snowstorm’ even tho it only snowed 6 inches,” he wrote, “making me along with hundreds of other people sleep on tile floors near our gate in the middle of a pandemic.”

There has been an uptick in sudden flight cancelations across airlines throughout the world during this holiday season, something that is being blamed both on the sudden surge of omicron COVID cases as well as weather.

While it wasn’t immediately clear what day @nathanielka__bamba got delayed, Delta reported canceling at least 250 of its 4133 scheduled flights on Tuesday.

Traveling during the holidays while we are still dealing with a pandemic, particularly in light of the surge, remains a controversial decision, and some people failed to have any sympathy for the situation the TikToker and all of the other people in his video found themselves dealing with.

“Ppl are so entitled, flying during holidays, bad weather, and peak pandemic and expect no cancellations,” @apocalypzedreams complained.

Another suggested that “this is literally the reason these companies are pushing the cdc to put workers in jeopardy. You chose to travel, they’re short staffed deal with it.”

@nathanielka__bamba made it clear that he didn’t hold the Delta employees dealing with this chaos on the ground responsible for any of it, noting that he felt “they did their best” and “just were left by their company to drown.” In one of several follow-up videos addressing comments, he ultimately called it a “higher up issue” at Delta.

Still, more cancelations are expected for the time being due to staff shortages and ongoing pandemic concerns, so while not everyone is able to cancel their travel plans at this point, if you’re getting ready to hop on a plane, it’s not a bad idea to expect last minute delays.

The Daily Dot has reached out to @nathanielka__bamba via TikTok comment and Delta Air Lines.