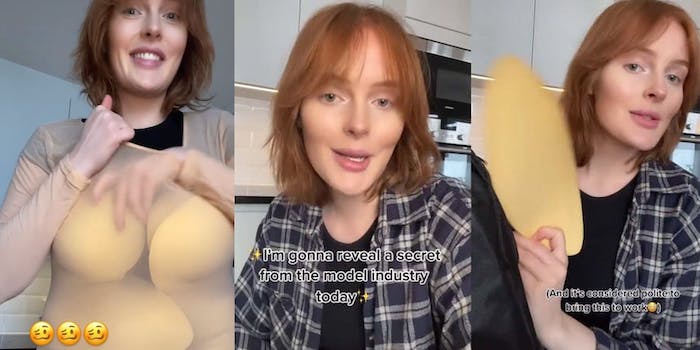 ‘Just use real plus-size women’: Plus-size model reveals she’s asked to use parts of a ‘fat suit’ for work in viral TikTok

'This explains the midsections that never make sense.'

Plus-size model Karoline Bjørnelykke said that she wears padding when modeling for some plus-sized clothing brands. Many of these brands, she said, offer sizes that are too large for her, but they use her as a model because “they want the neck and the face to look really slim and sharp.”

“Which doesn’t just create unrealistic standards,” she said in a TikTok posted on Nov. 30, “But impossible ones.”

Bjørnelykke also said that it is considered “polite” to bring padding, or a “fat suit in pieces,” to photoshoots—though she told the Daily Dot in an email that when she first learned that plus sized models sometimes use padding, she thought it was “a bit weird.” Her video received over 300,000 views.

“So if the clothes look really good from the front, it probably looks like shit from the back,” said Bjørnelykke, who clarified that some photos of her include padding and strategic pinning of clothes. “My suggestion is just use real plus-sized women. Because there are so many gorgeous plus sized women out there.”

Bjørnelykke’s video is not the first time that plus size models have revealed that they are instructed to wear padding during photoshoots. English model Katie Green spoke with the Daily Mail about her work with padding in 2014, and a handful of other models told Refinery29 about their “fat pads” that same year as well.

Reactions to Bjørnelykke’s TikTok ranged from sadness surrounding the practice of using padding in photoshoots, to outrage at the modeling industry.

“This explains the midsections that never make sense,” wrote @happilyeverbaxter.

“This is why I’m so self conscious about my face shape,” commented @bendygendy.

Many in the comments also blamed Bjørnelykke for taking the jobs that photograph her in padding. In response, the model told the Daily Dot that she no longer does those “kinds of jobs.”

“But for the models that do, I don’t think it’s right to go after the model. For a model who’s signed with an agency it’s hard to turn down jobs,” she said. “If one model refuses the job, the next model in line will take it. There is no way all models will collectively refuse all these jobs.”

Her hope is that consumers stop buying from brands that use padding.

“At the end of the day, it’s capitalism, and the consumers have the power.”

This story has been updated with comment from Bjørnelykke.