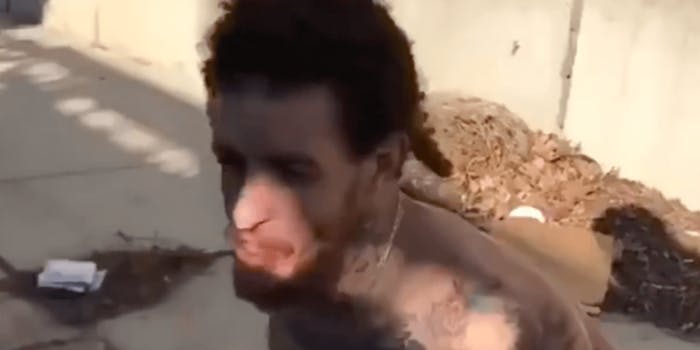 The video shows the shirtless and handcuffed former NBA player being questioned about an altercation.

A Maryland police officer has been suspended for shooting a video showing shirtless and handcuffed former NBA player Delonte West being questioned about an altercation this week, police officials in Prince George’s County said.

The video, the second of two (chronologically) shown on social media, shows a rambling and beaten West sitting on a curb with his hands cuffed behind his back. On Tuesday, Prince George’s County Police officials said they discovered one of their officers shot the video of West sitting on the curb. An investigation followed and the department levied the suspension onto the officer on Tuesday.

The other video, showing West being viciously beaten up by an unidentified man, has also made the social media rounds.

Apparently Delonte West was seen getting beat up in the street this Morning. I went to school with him and it’s crazy to see just how his life has gone downhill since the NBA. pic.twitter.com/chm6Sbu9h6

In the officer-shot video, an unnamed officer is heard asking West: “Why’d you hit him? Did he attack you first? Self-defense? Or did you hit him?”

“Walkin’ down the street and he approached me with a gun,” West said, before saying “I don’t give a fuck… I’m the real fucking president.”

West has had a history of episodes involving his noted mental illness. His former agent Aaron Goodwin confirmed to TMZ that West was involved in the altercation and needed medical attention.

In the report, a witness apparently told police that West initiated the altercation by hitting the other man with a glass bottle.

“[The witness] told officers that she observed the handcuffed male [West] first hit the other with a glass bottle, and that man responded by striking the one who had thrown the bottle several times,” Prince George’s County police said.

NBA fans and players have sent well-wishes and are supposedly reaching out to help West. Former college teammate and former NBA All-Star Jameer Nelson weighed in on his friend’s situation.

“Yes, I’ve spoken to him over the past several months, just trying to be there for him as a friend,” Nelson wrote.