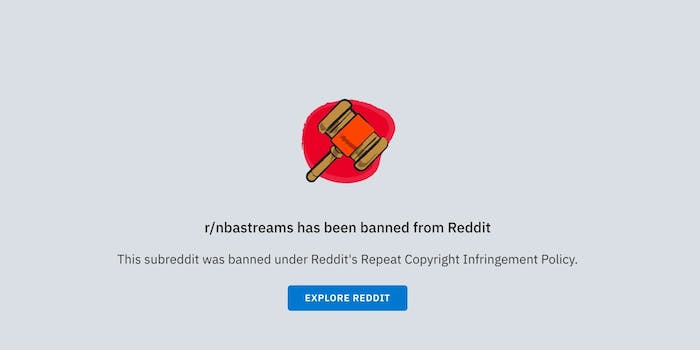 In the wake of the 2019 NBA Finals, Reddit has officially shut down r/NBAStreams. The subreddit had more than 400,000 subscribers and enabled piracy on a massive scale. The NBA Streams community on Reddit shared live streams for every single NBA game, including the playoffs, and most of them were available in HD and were mobile compatible. It was a boon in particular for fans who were regularly subject to blackout restrictions or live internationally.

The move followed reports that viewership of the NBA Finals was down 19% this year, and mounting pressure from the NBA may have contributed to the decision. (Reddit has not responded to a request for comment.)

The landing page for the subreddit indicated it had been suspended under Reddit’s Repeat Copyright Infringement Policy, which states:

Our policy is to close the accounts of users, in appropriate circumstances, who have repeatedly been charged with copyright infringement. Sometimes a repeat infringement problem is limited to one user and we close just that user’s account. Other times, the problem pervades a whole subreddit community and we close the subreddit.

Despite the offseason lull, the ban did not go without notice. Fans were quick to mourn the loss on Twitter.

There are people I know who had league pass and were STILL using the nbastreams reddit because it was the better option.

That's always been the real problem.

r/nbastreams just got banned on reddit. Nothing else matters right now.

The ban is not unexpected, and it may be part of a larger effort to crack down on piracy on the site.

“While the ban is disappointing it isn’t a surprise and we have been preparing for this possibility,” one moderator wrote.

In that same post, the moderator claims a replacement for NBA Streams will be available soon.