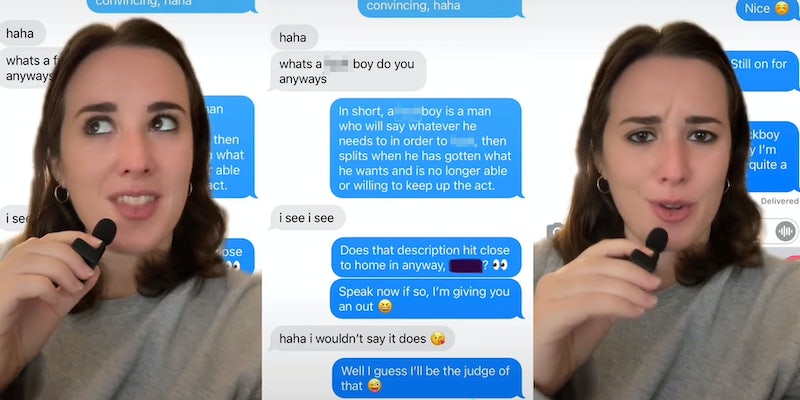 ‘F*ckboys can be found in every corner of society’: TikToker shares her definition of a ‘f*ckboy,’ sparking debate

'The f*ckboy wastes no time except for everyone else's.'

A woman on TikTok shared her definition of the somewhat controversial term “fuckboy,” and that definition has viewers divided.

The TikToker runs an account (@textswithshittymen), which, according to the bio, is dedicated to “clapping back at all the male audacity so you don’t have to.” The account has nearly 25,000 followers, and her video defining fuckboys received about 17,000 views as of Tuesday.

In the video, the TikToker says she’s been asked the question “what is a fuckboy” by women and men alike. “While that archetype does exist in reality, in my experience, fuckboys can be found in every corner of our society. They are not bound by class or creed,” the TikToker says in the video.

To demonstrate the definition of a fuckboy, the TikToker shares a screenshot of a text conversation she seemingly had with a man. In the screenshot, the man, who she says has a PhD, asked the TikToker what a fuckboy is to her.

The TikToker said in response, “In short, a fuckboy is a man who will say whatever he needs in order to fuck, then splits when he has gotten what he wants and is no longer able or willing to keep up the act.”

Then, with a possibly joking tone, the TikToker asked the man if that description fits him. She offered him an out if it does, but he reassured her it doesn’t and sent a kiss emoji.

“Well I guess I’ll be the judge of that,” the woman replied.

“Now this guy is claiming it doesn’t apply to him (but) he knows it applies to him,” the TikToker says in the video. “He just can’t say that because he’s still telling me what he thinks it is I want to hear.”

In “classic fuckboy fashion,” she says the man ghosted her and their plans the next day.

Another screenshot of the text conversation shows the TikToker asking if they’re still on for that day. The man doesn’t reply, so three hours later, the TikToker double-texts.

“I guess not! Classic fuckboy move btw, but can’t say I’m surprised. There were quite a few red flags,” the text read.

“The fuckboy wastes no time except for everyone else’s,” the TikToker says, looking annoyed in the video. “And while there were some red flags with this guy, fuckboys are getting so good at pretending to be kind and cool. It’s genuinely frightening. So many men who seemed nice and personable will just turn on a dime and go silent after they smash.”

The woman’s video garnered mixed reactions, with several users who appear to be men seeming to defend the man who ghosted her.

“That’s on you for thinking he’d openly tell you he’s one?” one viewer commented on the video.

“Y’all make it so easy for fboys tho,” another viewer commented.

“Becz if we were honest they wouldn’t do it so there’s no other choice but to lie lol,” another said, to which the TikToker asked: “Who raised you?”

Other men chimed in with their own justifications for fuckboys actions.

“The issue is that we as men only really know if we wanna be with you post ‘you know what.’ At that point our brain just goes ‘I’m in’, or ‘I’m out,’ one such user said.

“Women complain about fuckbois but they constantly entertain them. They don’t like nice guys because they’re boring,” another user wrote.

Someone else commented, “Stay Toxic Kings.”

The few comments that appeared to be from women supported the TikToker, saying her definition was accurate.

“100%….they could win an Oscar for their I’m a good guy performance,” one viewer commented.

“Couldn’t have said it better,” someone else wrote with a clapping emoji.

The Daily Dot reached out to user @textswithshittymen via TikTok comment.