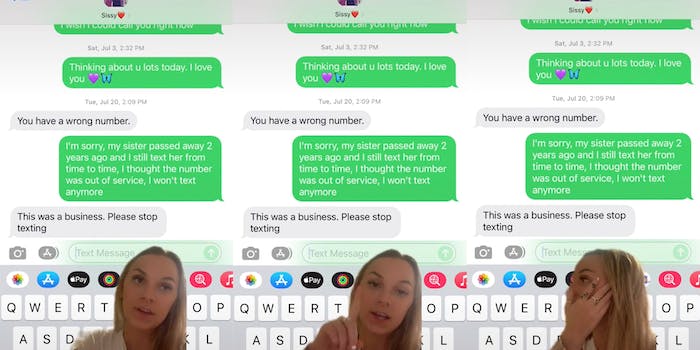 ‘Time for them to go out of business’: TikToker regularly texts deceased sister. Then a business ‘coldly’ responds

'At least I got to see her name pop up on my phone one last time.'

People are urging a woman to expose the business that responded “coldly” after she texted the number that belonged to her late sister as a way to cope with her loss.

Faith Sidman (@faithsidman1) posted a screenshot of the text exchange on Wednesday with the caption, “At least I got to see her name pop up on my phone one last time.” The TikTok had over 880,000 views by Thursday.

In the screenshot, Sidman texted her sister’s old number on July 3 to say, “Thinking about u lots today. I love u.” On July 20, she received a response that read, “You have a wrong number.”

Sidman responded with an apology, explaining that her sister passed away two years ago and that she texts the number from time to time. She said she thought the number was out of service and won’t text it anymore.

The number responded, “This was a business. Please stop texting.”

Later in the comments, Sidman shared that she has been texting her sister’s number since the day her sister passed. Sidman said she didn’t know “the number would unexpectedly be given to someone new.”

In the comments, one user said the business was being “cruel” in its response.

“How could someone be so cold like that,” @jordonbraun commented. “I’m sorry hun.”

“Time for them to go out of business,” @torilyn1329 commented.

Others were asking for Sidman to expose the name of the company that texted her.

“Girl.. if you dont search up that number on safari and out what business it is so we can go after em..” @haileyadely commented.

“[The text reply] was really hard to see,” Sidman told the Daily Dot via TikTok DM. “After losing my sister I was devastated and I had a hard time accepting she was gone, but it was a nice release to be able to text her number as if she was still here. After getting that text it just made her being gone feel even more real, and the person being completely unsympathetic didn’t help.”

She added: “I don’t think it’s necessary to expose the business because although unmoral, they were right. It isn’t her number anymore. I also don’t feel comfortable releasing the number for the same reason but also because even though it isn’t, to me it still feels like that is her number.”