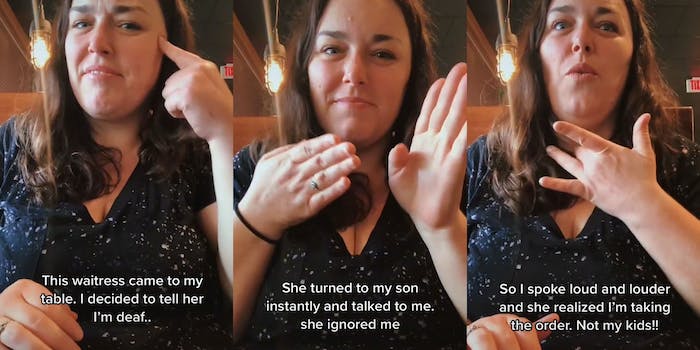 A deaf woman expressed frustration about a waitress ignoring her due to her disability. TikTok told her to get over it.

'The comment section did NOT pass the vibe check.'

A deaf content creator received backlash on TikTok for sharing a situation where her waitress allegedly ignored her while taking her families’ order. TikToker Lauren Williams (@laurenwilliams) uploaded the video where she relayed the interaction via American Sign Language (ASL.)

“This waitress came to my table. I decided to tell her I’m deaf,” Williams wrote in the overlay text. She then signs that the waitress ignored her. “So I spoke loud and louder and she realized I’m taking the order. Not my kids!!” she continues.

While more than a million users saw the TikTok, it seems the video landed on the “wrong side of TikTok.” A handful of commenters were shocked at the majority of comments defending the server’s actions.

“As someone who’s been a server for years, children often translate for all sorts of situations. I’m sure it wasn’t done to insult you,” a top comment with 18,000 likes read.

“kids are faster, I got six tables bye,” a user, who’s presumably a server, commented.

“I wouldn’t be able to communicate with you. So I’m gonna ask your kid. Get over it,” another comment with 2,000 likes read.

Others pointed out that Williams herself was not accommodating to the waitress, instead of the other way around.

“Why didn’t you let the kids order, or write it down? Why make it harder on the waitress?,” a user wrote.

Though most of the comments shared similar sentiments on rationalizing the server’s actions, some viewers were disappointed at the ableist comments toward Williams.

“Not you guys ACTUALLY digging on this woman for wanting to be treated like a human being,” another wrote.

“The comments missed the entire point,” another viewer responded.  “Y’all need to do better and really think about what it means to treat people with ALL abilities with dignity.”

Williams managed to reply to a few comments debunking myths about deaf people. She explained while many deaf people are mute, there still are some that can speak. The creator also posted a follow-up video claiming her initial TikTok was not meant to be negative. Still, the comments accused her of being negative for asking hearing people to “do better.”

“I’m just showing hearing people that it’s not hard to interact with deaf people,” she wrote in the video. “That’s it, love y’all!”

The Daily Dot has reached out to the creator via TikTok comment for this story.