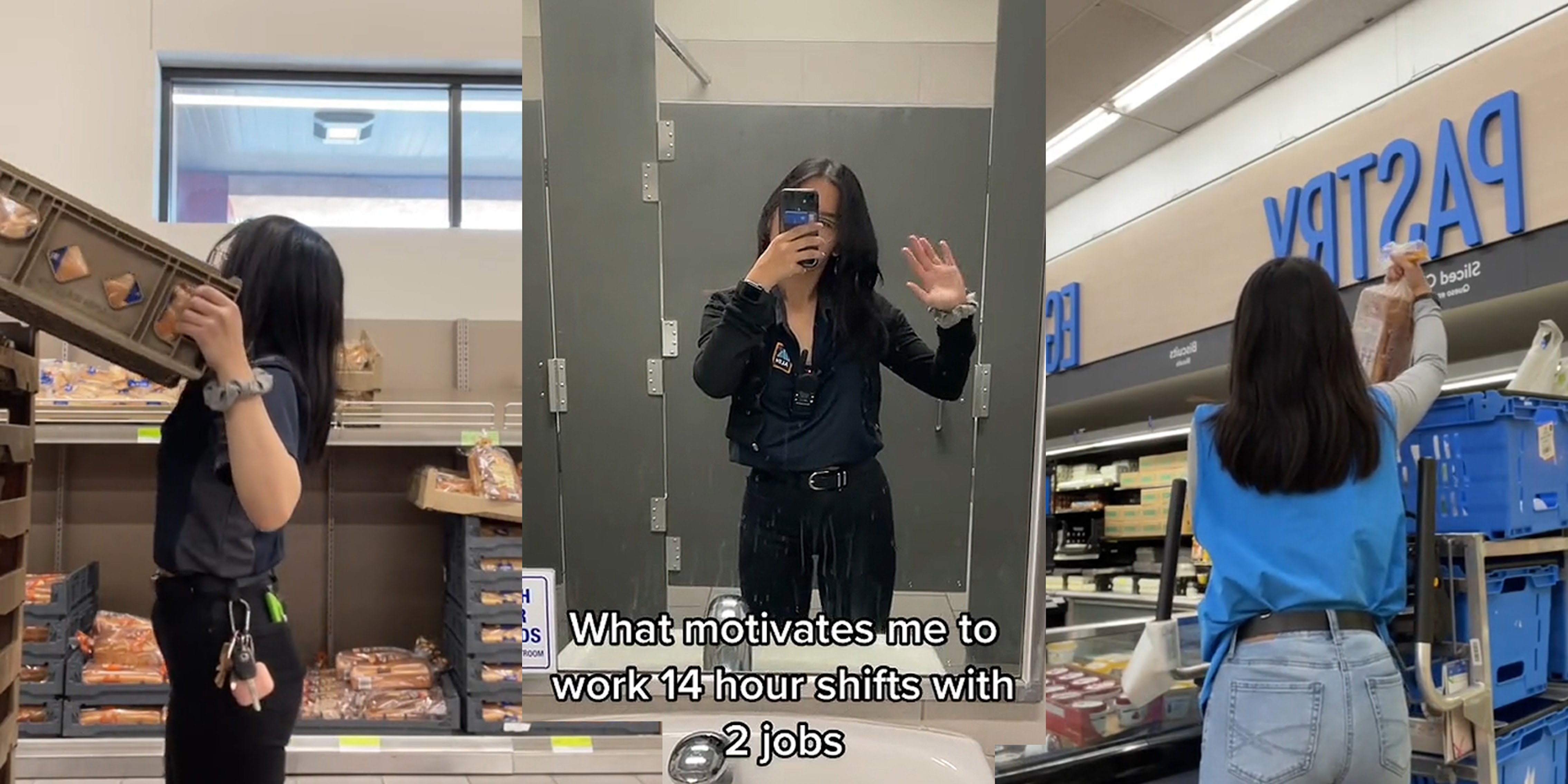 ‘I can’t even handle an 8-hour shift’: Worker shares ‘day in the life’ working 2 full-time jobs at Aldi and Walmart

'Me crying because I had to stay 30 minutes late during my 8-hour shift.'

Around 8% of Americans hold more than one job, per CBS News. The reasons for doing so vary. Some simply take a second job as a way to save money, while others require a second job simply to make ends meet.

A TikToker shared a typical day in their life working two full-time jobs. In a video with over 2 million views, user Kristy (@asap.kristy) shows her workday, which begins at 6am and ends around 10:30pm. Her jobs include stocking at a grocery store (she revealed in other videos the grocery store is Aldi) and fulfilling online orders at Walmart.

In the caption, Kristy clarifies that she does not work both jobs every day. She also notes in the video she is working two jobs in order to save $20,000.

Commenters were appreciative of Kristy’s effort but warned her to be cautious.

“Just be careful and really take care of yourself,” wrote a user. “It catches up trust me.”

“Don’t forget to take care of yourself,” echoed another. “Coming from someone who used to work 70-85 hours a week, sometimes it’s not worth it but respect.”

Others simply voiced how impressed they were with Kristy’s work ethic.

“Fr respect anyone who can have multiple jobs,” shared a commenter. “I can’t even handle a 8 hour shift.”

“Me crying because I had to stay 30 minutes late during my 8 hour shift,” added a second.

“I find it hard to work just part time girl but you are so strong and hardworking! you’re amazing,” offered a third.

Even more users recalled their own experiences working multiple jobs at once.

“GET IT GIRL!! I worked 3 jobs for 5 years and people told me I was insane and doubted me,” remembered a commenter. “Now I own my first home and am so happy I did it.”

Kristy shared with viewers in other videos what motivates her and how she takes care of her mental health.

“I’ve been asked quite often how I don’t get tired from working these 14-hour shifts,” she says in one video. “I do get tired. I’m human. There are days I’m extremely exhausted. However, I remind myself that this is only temporary, and it’s a big stepping stone in order for me to reach my goals and to become successful.”

In another, she shares how she spends her only day off. She says she wakes up at 8am to start her day with stretches and a workout. She then says she journals, which she calls “extremely therapeutic”; responds to emails; and makes content for TikTok. She ends her day by watching Netflix.

“My only day off is typically my reset day which keeps me mentally sane,” she shared in the caption of this TikTok.

Kristy told the Daily Dot she “was inspired to work two jobs because [she] wanted an extra source of income to be able to invest as much as possible into the stock market & into [her] retirement while [she’s] still young.”

She said she created the video to “shed light” on the reality of what it takes to work two jobs.

“It’s hard work & it’s not easy; however, I’m determined to work hard now so that I am able to retire earlier,” she said.