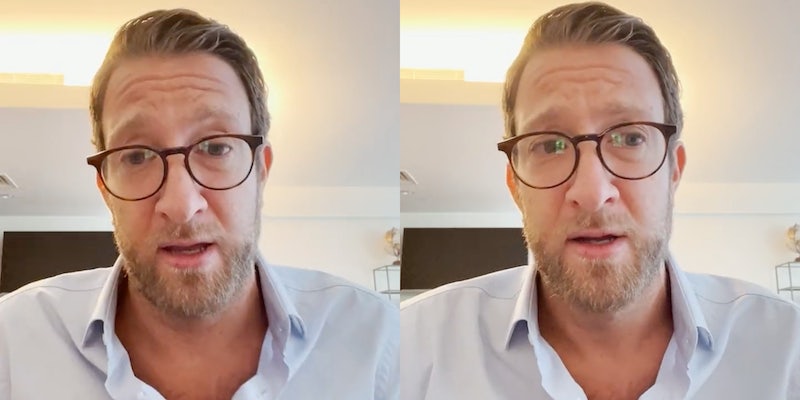 ‘The dude is a legit scumbag’: Clip resurfaces of Dave Portnoy joking about rape after he’s accused of sexual violence against teen

Critics point to his history of misogynist humor.

In response to a report from Business Insider on Thursday, Barstool Sports’ founder Dave Portnoy denied being a “sexual deviant.” The article detailed allegations from young women who claimed to have had violent and humiliating sex with Portnoy which included being filmed and choked without consent. One, a teen who had recently graduated high school, says her encounter with Portnoy led her to suicidal thoughts and hospitalization.

Now, critics are pointing to Portnoy’s own history of misogynist humor and resurfacing his infamous public statements.

Portnoy acknowledged the allegations as “serious shit,” and said his video testimony, which he posted to Twitter, came against the advice of his lawyers.

“I’m going to do what I always do and just tell the truth,” he said in the video. “Shoot from the hip, and tell exactly how I feel and where I’m at.”

Portnoy, 44, is known for his crude, unapologetic humor and has been publicly vocal about liking to have sex with young women, per Insider.

In the video, Portnoy said he wasn’t surprised when the Insider article was published because every woman he “remotely knows” has messaged him for the last eight months about it, he claimed. Still, he thought the article may not be published.

“I’m pretty confident with myself,” he said. “I know I’ve never done anything weird with a girl, ever. Never anything remotely nonconsensual.”

Portnoy said he feels “scared” and claimed he has a target on his back, put there by people with an agenda against him.

Twitter user @Gonzo5517 tweeted a resurfaced video of Portnoy, saying, “With the Dave Portnoy news. I’m not surprised whatsoever. The dude is a legit scumbag.” The video showed the Barstools founder verbally standing by a previous comment he had made claiming that women who wear size six skinny jeans “deserve to be raped.” In the video, Portnoy called the comment “a funny joke.”

The infamous comment came in 2010, when Portnoy wrote a blog post about an Australian man who had been acquitted of raping a 24-year-old woman wearing skinny jeans: “[E]ven though I never condone rape if you’re a size 6 and you’re wearing skinny jeans you kind of deserve to be raped right?”

Another video from an interview Portnoy did on the Tucker Carlson show in May showed Portnoy expressing one regret about his size six rape comment, effectively doubling down on the controversial comment with another joke about it.

“Where I failed, I thought size six was like size 20,” he said on the show. “I had, I had my measurements screwed up, I wasn’t on top of that.”

Despite the allegations and the resurfaced video clips, Portnoy’s supporters said he is an honest, respectful man.

“After nearly 6 years knowing Dave Portnoy – hosting radio together, dozens of work trips, dinners, nights out – I’m constantly asked what he is really like,” Barstool commissioner Sam Riggs Bozoian wrote on Twitter. “Dave is ALWAYS honest, ALWAYS tries to do the right thing, ALWAYS is respectful. A man I’m extremely proud to work with.”

Portnoy’s ex-wife Renee Portnoy tweeted, “I’ve said I’ll always be [Portnoy’s] biggest fan. Still am. And say what you want about him, but he is honest perhaps to a fault. He’s also loyal, transparent, generous and the funniest person to ever grace the internet #viva.”

Others, though, weren’t very supportive and discredited Portnoy’s video testimony.

“The Dave Portnoy stans pretending that ’44 year old man consistently preying on and soliciting 19 year old girls fresh out of high school for traumatic sexual exploits’ is normal rather than completely predatory… ‘The girls are lying!’ They’re TEENAGERS. And he is FORTY FOUR.” journalist Sophie Ross tweeted.

Soccer player Kaiya McCullough tweeted Business Insider’s article, saying, “this is horrific to read and once again I am reiterating how awful and racist/sexist/homophobic/transphobic/fatphobic/etc. B*rstool is as an entity & P*rtnoy is as a person. If you are aligning yourself with them, you are a problem.”

Many weren’t surprised to see the recent allegations, though.

Twitter personality Brandy Jansen tweeted, “dave portnoy is a disgusting piece of shit and anyone who admires him is a pathetic worm.”

If you are a teen dealing with depression or other mental health issues, see PBS.org for a list of resources and organizations that can help you. If you are an adult, see Mental Health Resources. For more information about suicide prevention or to speak with someone confidentially, contact the National Suicide Prevention Lifeline (U.S.) or Samaritans (U.K.). If you are a victim of sexual assault or want more information on sexual assault, contact the Rape, Abuse & Incest National Network at 1-800-656-HOPE (4673).