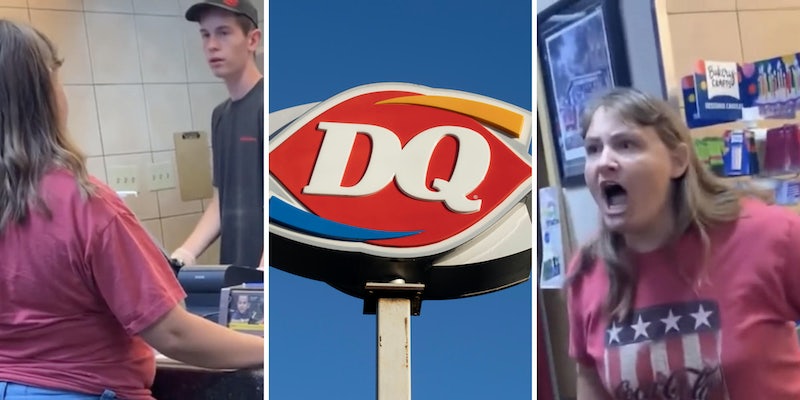 She then asks the workers for help when other patrons step in to defend them.

It’s always disheartening whenever you’re looking forward to eating at a specific place, only to learn it’s either closing in a few minutes or you just missed the cut-off time.

When that happens, you probably do what any other average person would do: amble on home to whatever boring leftovers you’ve got waiting in your fridge, or go to bed hungry, sulking the entire time.

This “Karen” opted to do neither. Instead, she chose to berate a young Dairy Queen employee after learning the restaurant was closing before she could place her order.

The incident was filmed and is making the rounds on Reddit, with over 11,000 upvotes on a repost. It’s unclear where the clip originated.

In multiple instances in the clip, the worker tries to deescalate the situation, but the woman keeps shouting at him. The employee renders several apologies to the customer throughout the interaction.

“I asked you when I got out of my car, now I want a phone number,” she tells him. The employee agrees and tells the woman he’s going to head to the back to get her a phone number immediately, adding, “I’m sorry about that.”

The woman responds, “No you’re not,” to which the worker stands motionless for a few seconds before she continues to voice her anger that she wasn’t informed of the store’s closing time.

It appears her ire is rooted in her claim that she needlessly spent 10 minutes in the drive-thru line. She argues that if she was informed earlier that the store was closing, then she could’ve placed her order in a timely fashion. Off-camera, two people comment on the situation.

“I’m about to call her a Karen,” one person says.

“Me, too. She’s being a fucking Karen,” another agrees.

The person filming then speaks directly to the woman, saying, “Oh my God, you need to chill out.”

“You can fuck off,” the woman says, looking into camera.

“Everyone here thinks you need to chill out. … Go to another restaurant,” the filmer says.

When it’s suggested that she go to another restaurant, she begins arguing with the filmer and screams when they point out the employee informed everyone that the restaurant is closing.

“Inside!” she screams. “He said that the drive-thru was open!”

The woman then turns to the store’s employees and asks them to tell the other customers to stop speaking to her.

“No I’m standing up for the employees that can’t bitch you out like I can,” someone off-camera says.

Toward the end of the video, police officers enter the Dairy Queen. She stops yelling and arguing with the other patrons in the establishment.

Redditors who commented on the post were shocked at the woman’s treatment of the worker.

“Imagine yelling at a minor over a fucking DQ order,” one said.

“He looked so scared. Probably the first time he’s had that happen and it’s intimidating as fuck at that age! Poor guy was probably shaking for a good while after. Hope he got the praise he deserves,” another said.

Others called out the woman for her apparent hypocrisy and expecting the workers to step in against the other customers.

“And then asking for help when another customer calls her out. Eternal victim,” one said.

“She had the nerve to call the other woman a Karen when she got called out,” another wrote.

Another Reddit user shared that their daughter would often deal with angry customer while managing a Dairy Queen location and that she implemented a zero tolerance “cussing” policy against underage workers. “She used to refuse to serve anyone who cursed at a 14 year old. She ended up calling the police in so many people in violation of this policy, because they would also refuse to leave when she informed them that they don’t get ice cream if they call a 14 year old a fucking cunt. Adults in America are weird,” they wrote.

While wages are increasing across the board, many retail workers are still struggling to make ends meet and are leaving their jobs in search of more lucrative solutions, according to the Washington Post. There are tons of studies that have highlighted how widespread mistreatment of retail workers is harming the industry at large, which has only been further compounded by the COVID-19 pandemic.