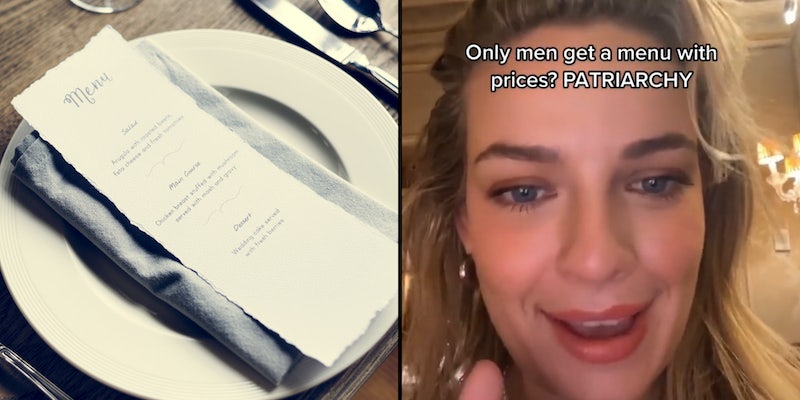 ‘I’m the breadwinner’: Woman takes her boyfriend to ‘bougie’ restaurant, only he gets menu with prices

'Only men get a menu with prices? PATRIARCHY.'

A woman says that she took her boyfriend to an upscale restaurant and he was given a menu that listed prices, while she did not.

Host and TikToker Abbie Chatfield posted a TikTok she took at a “bougie restaurant” on April 3. In it, she says that her boyfriend said the restaurant was “expensive,” and she asked him how he knew that.

“And he got a menu with prices on it, and I didn’t,” Chatfield says. “I’m the breadwinner.”

In the overlay text of the video, Chatfield wrote “only men get a menu with prices? PATRIARCHY.” The TikTok has been viewed over 710,000 times.

As reported by Atlas Obscura, Chatfield was given something called a “ladies menu,” or a menu that doesn’t list the prices of dishes at a restaurant. According to Atlas Obscura, such menus are not par for the course in the United States; Chatfield commented on the video saying that the restaurant is in Venice, Italy.

In the comments section of her TikTok, Chatfield shared that she and her boyfriend switched menus and that the waitstaff ended up handing her the bill at the end of their meal.

While a select few commenters said that Chatfield’s boyfriend should have paid for the meal, many joined her in her frustration.

“I’d be like excuse I’m just wondering since IM PAYING if I could have a menu with prices,” @fuxkedupbutcoping wrote.

“I went to a restaurant once which had steak and ‘ladies steak’ on the menu. The ladies was just a smaller cut,” @haypaige08 commented. “I ordered the regular steak”

“The idea of what is ‘feminine’ & what is not at restaurants is ridiculous! They always give me the cocktail or smaller meal even when it’s not mine,” @danikaleead commented.

The Daily Dot has reached out to Chatfield via Instagram direct message.