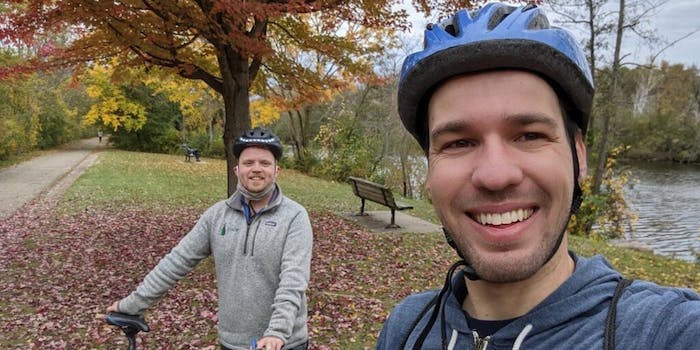 Cyclist dies hours after tweeting about dangerous biking conditions in D.C. while traveling to get COVID vaccine

A cyclist was killed in a bike accident involving five vehicles just hours after he tweeted about the lack of bike safety in Washington, D.C.

Jim Pagels died on Friday evening in a chain-reaction collision, according to NBC Washington.

Earlier that day, the 29-year-old Ph.D student who was passionate about urban planning had tweeted about how he had to take a dangerous route to take his COVID-19 vaccine.

Pagels was a Ph.D student in economics at the University of Michigan in Ann Arbor, and as soon as they went into remote learning last year, Pagels moved back to D.C., his friend Nolan Gray, also an urban planner, told the Daily Dot on Monday.

Gray said he has known Pagels since 2015 when he moved to Washington, D.C., where Pagels always felt “committed” to live.

Gray said he was always passionate about cities, and had shaped his Ph.D around urban planning.

“Jim was passionate about cities—how we can make them affordable and accessible to everyone. It’s what drove his economics research,” Gray said.

Pagels’ passion shone through in his social media commentary and blogs on the issue of urban planning and safety.

In a 2016 Medium post, he wrote about how often he has to “dangerously swerve, often abruptly, out of the bike lane into car lane traffic due to a car or truck in the bike lane.”

On Sunday, his friend Finn Vigeland referred to a part of the article and wrote that Pagels was well aware of the issue that would eventually kill him.

“He warned us,” Vigeland wrote.

The irony of a city planner, who blogged passionately about bike safety to housing issues, being killed from poor city planning wasn’t lost on his friends.

“For Jim, who was a passionate urbanist and safe streets advocate, to become DC’s latest victim of traffic violence is infuriating as it is devastating,” Vigeland wrote in the tweet where he announced Pagels’ death.

“It’s a horrible irony that poor urban planning decisions he hoped to correct would eventually take his life,” Gray told the Daily Dot.

Gray and Viegland are organizing a memorial bike ride for Pagels in D.C. on Thursday.

On Monday, condolences poured in on Vigeland’s tweet, but even those messages reflected frustration of bikers in the city.

“This is an intersection where cars come FLYING out of an interstate tunnel. I’ve only lived in DC two months but I’ve already told friends how my first and last 5 minutes of bike rides are the most dangerous when I have to use Mass Ave,” wrote one user on Twitter.

In recent years, D.C. has made moves to improve bike safety for its bikers. In 2020, a bill was passed with the aim to prioritize building protected bike lanes, an attempt to curb its number of deaths from bike accidents.

But Gray says much more is left to be done, and the city has a long way to go to reach its 2024 target of zero traffic fatalities.

He said the corridor where Pagels was killed is only one of the few ways for people to get from one side of the city to the other. The lack of a bicycle lane there means cyclists are often at the risk of being hit.

“As designed, the city is basically asking for tragedies like the one that took Jim’s life,” he said. “The district must urgently live up to its promises and make the street design changes needed to ensure that this never happens again.”