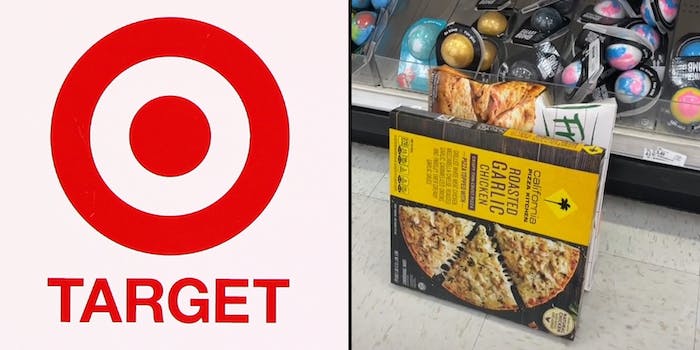 ‘It’s as bad as stealing’: Target worker puts customers who leave stuff in aisles on blast

'I found a pound of ground beef in the candy area at the check out once.'

A Target worker put customers who leave stuff in aisles on blast in a viral TikTok video.

The worker, known as Kaitlin Sonday (@kaitlinsondae) on TikTok, often posts about her job as a Target employee and has about 19,000 followers.

In the video, Sonday shows a pair of frozen pizzas that a customer left in an aisle next to the bath bombs. As of Sunday, the video received about 290,000 views on TikTok.

“Guys, I literally can’t make this up. People think oh, I stage these, but I literally don’t. Like I’m literally walking down the aisle, and I see two frozen pizzas sitting on the ground,” Sonday says in the video. “How awesome, and they’re frozen and I bet they’re not even cold.”

“Yup,” the TikToker adds after squeezing the pizza boxes to confirm they aren’t cold.

The video received about 300 comments, and several store employees voiced their agreement with Sonday’s annoyance.

“Like it’s not that hard to bring it up at checkout and tell us you don’t want it we don’t mind better as go backs than some place random,” one viewer commented on the video.

“If y’all don’t want something please just hand it to an employee!!!” another viewer commented.

“it’s as bad as stealing but you don’t get in trouble for it and nobody gets to eat the food… worse then, technically,” one viewer said.

Some viewers, who seem to be store employees, shared examples of the items they find left in random aisles.

“i found a single POTATO wedged in the travel beauty section … WHY,” one user said.

“this reminds me when someone tried hiding a watermelon on my check lane as if i wouldn’t see a giant watermelon next to the candy,” another user said.

Someone else wrote, “I found a pound of ground beef in the candy area at the check out once.”

One viewer questioned the TikToker’s aggravation, though, saying, “Why do u care ab target so much tho?”

In reply, Sonday wrote, “I work there lmao? It’s my niche as well and you’d know that if you looked at my profile even for a couple seconds!!”

The Daily Dot reached out to Sonday via TikTok comment.