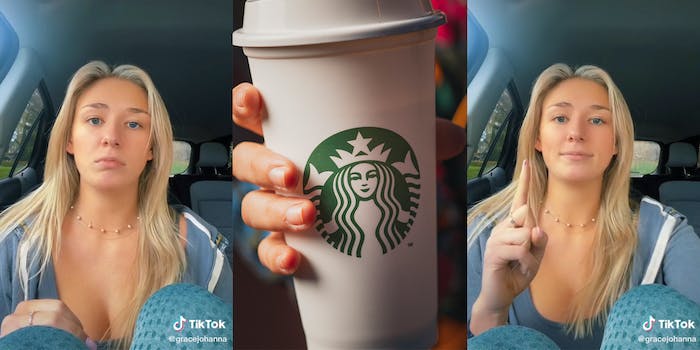 ‘So you’re telling me these people were shamed and caught into this Conga line of morality?’: Customer ends a pay-it-forward chain at Starbucks, sparking debate

'I am the one that was helped, and I am not helping anyone else.'

A TikToker’s decision to end a pay-it-forward chain in the Starbucks drive-thru has sparked some discussion on the platform, with some agreeing that the practice puts pressure on people down the line.

Filming herself in her car, Grace Johanna (@gracejohanna) shared her experience of getting caught in a pay-it-forward in which she says the previous five customers were “shamed” and “caught into this Conga line of morality,” causing them to keep the chain going. The video has garnered 1.3 million views so far.

“I’m not that girl,” @gracejohanna says in the video. “I deserve to have a good day. I deserve this free sandwich, dude. You’re not taking this away from me. That defeats the whole point of someone doing something nice for me. I am the one that was helped, and I am not helping anyone else, OK.”

Some viewers shared their take of the situation, agreeing with Johanna that not every pay-it-forward chain needs to carry on endlessly.

“Barista here!” one commenter wrote. “I 100% agree w this, sometimes it’s important to indulge and appreciate a nice gesture without feeling obligated to pay for anyone else.”

“No one did it FOR YOU they did it (because) they felt bad and wanted to continue the line,” another commenter wrote. “You said it yourself. They were shamed.”

“I completely agree!” a commenter wrote. “If someone pays for my drink no way in heck I’m paying for the car behind me. Stop with all that (bullshit).”

Others offered an alternative to paying for another customer’s order.

“I’ve seen some people end the morality train by just tipping whatever their order was worth (because) it’s still being kind but just to the employees,” one said.

“Tip the barista instead,” another urged.

Johanna clarified to commenters that she wasn’t averse to doing something nice like keeping a pay-it-forward chain going—she just wanted to enjoy her coffee and sandwich that was already paid for.

“Of course I do nice gestures for people all the time,” she wrote. “But in this moment I wanted to enjoy the fact someone did it for me.”

The Daily Dot has reached out to @gracejohanna via Instagram direct message regarding the video.