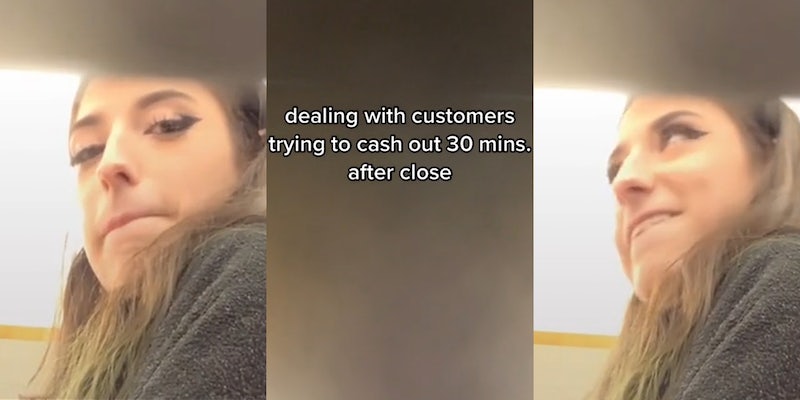 ‘Oh, you’re gonna put the guilt trip on me?’: Worker calls out customer for staying 15 minutes after close in viral TikTok

In a viral TikTok video, a customer accuses a worker of “guilt-tripping” her after the worker tells her the store has been closed for over 15 minutes.

“Dealing with customers trying to cash out 30 mins after close,” the video’s text overlay reads.

The worker, TikTok user @deidrapimental, recorded the incident discreetly behind the counter, so viewers cannot see the customer.

“However, we have been closed for well over 15 minutes,” the worker says.

“Oh, you’re gonna put the guilt trip on me,” the customer replies.

The woman then asks the worker to make sure that the sale prices and coupons have been applied to her items.

“Are you serious?” the customer responds.

The worker ensures the customer that she applied every coupon and sale price applicable, including her “GO points,” which saved her $8.

“Everything that should have come off did come off,” she says.

The customer continues to complain about the total cost of her groceries before the video cuts off.

“There’s something wrong,” the customer says. “Two-hundred-and-something dollars, and there’s nothing really that—most of it is fruit and vegetables. I didn’t even do deli or anything.”

The video received over 74,000 views, and several viewers were similarly frustrated with the customer’s behavior.

“Customers have no remorse in customer service. it’s their way or the highway, no middle ground. you have to lie to make them happy so they don’t freak,” one user said.

“She should have came in earlier if she was gonna do all that nonsense,” another said.

“Lol imagine getting upset and blaming the cashier for the cost of living increasing,” a third said.

The Daily Dot reached out to user @deidrapimental via Instagram direct message.