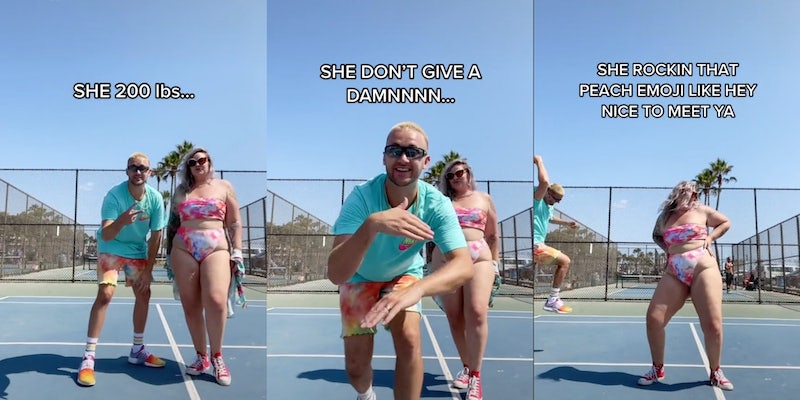 ‘She’s your QUEEN!’: The controversial Curvy Wife Guy is thriving on TikTok

But his song is getting old.

Curvy Wife Guy has brought his unconventional brand of body positivity to TikTok where, perhaps surprisingly, his messaging has been met by a welcoming audience.

After his viral 2017 Instagram post about how much he loves his wife’s curvy body and curvy women in general, Robbie Tripp was mockingly dubbed the Curvy White Guy. But four years later, he has almost 200,000 followers on Instagram and about 20,000 on TikTok. The Cut first noted Tripp’s

The Cut first noted Tripp’s success on TikTok, where viewers seem much more receptive to his message than they were to his original Instagram post.

Tripp’s first viral post sparked debate over his so-called positivity messaging. While some loved it, others saw a lot of issues, including his focus on male sexual preferences over how his curvy wife and other women feel about their own bodies and asserting that thin women aren’t “real” women.” Critics argued that he was using his wife to prove that he’s a good feminist while simultaneously objectifying women through idolization.

Tripp didn’t let his haters shoot him down, though, and he’s been continuing to plug his message on TikTok, which he joined in January. Many of his videos on the platform feature his 2019 rap single “Chubby Sexy” which includes lyrics like, “Her inner-thighs chafe / She knows how they taste.”

“I just love how there’s a whole body-positive category of TikTok that’s encouraging to all sizes,” Tripp told Mel magazine in a recent interview. “Some people tend to forget that this whole viral ‘curvy wife guy’ thing started because I wrote a heartfelt tribute to my wife about how beautiful she is and how attracted I am to her.”

The positive reception on TikTok could possibly be attributed to the platform’s younger audience and a culture of body acceptance and self-love on the app. The hashtags #bodypositivity and #bodypositive have accumulated 13.8 billion and 4.1 billion views, respectively, on TikTok.

Tripp’s wife, fashion blogger Sarah Tripp, often appears in his TikToks, as do other curvy women. They can often be seen dancing and flaunting their bodies in bikinis as Tripp points and hypes them up.

The comments on his videos seem mostly positive, with many viewers praising Tripp for loving his wife’s curves so openly.

One of his recent TikToks, which showcases Sarah Tripp ripping off a Hawaiian shirt to show off a sexy, revealing swimsuit underneath, received a slew of praise.

“This song gave me so much confidence thanks,” one viewer wrote. “I love you both!” another said. “She’s your QUEEN!”

Another commenter yelled, “WAIT IM OBSESSED WITH YOU.”

Despite appreciating the message, several viewers agreed that Tripp needs to find or drop a new song since his frequent use of “Chubby Sexy” is starting to get old.

Meanwhile, some are also questioning whether his TikToks are really any different from his original Instagram post, which was criticized for objectifying women.

His most viewed TikTok, which reads “POV: It’s a chubby girl summer,” shows Tripp dancing around and pointing at his wife’s body and curves.

Nevertheless, Tripp seems to plan to keep doing his thing.

“If anyone hated my viral post about Sarah, then they’re just hating a husband who loves and adores his wife,” Tripp told Mel. “I never understood the ‘backlash,’ and still don’t.”