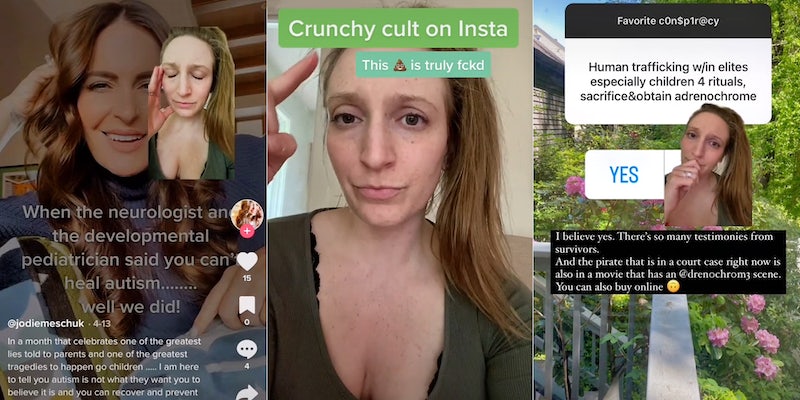 ‘Horrified but not surprised’: A TikToker is calling out the ‘crunchy’ parents for spreading conspiracy theories on social media

'This kinda makes me really sad,'

If you’ve ever frequented parenting blogs on social media, there’s a good chance you’ve come across a “crunchy” parent. The name indicates a form of neo-hippie-ism, or as The House and Homestead puts it: The definition of a ‘crunchy mom’ is a mom who practices natural parenting.”

But what does that look like? Some crunchy moms give birth at home, cloth-diaper their babes, prepare all their own organic baby foods, co-sleep, breastfeed, and believe in baby-led weaning.

Some “crunchies” are anti-vaccination and avoid any modern medical solutions, though other natural parenting practitioners vaccinate their children and encourage their peers to do so.

However, crunchy parents are often perceived as anti-traditional medical advice and are often ridiculed for healthcare ideas they tout that aren’t rooted in scientific principles, like this viral TikTok critiquing crunchy parents claiming they cured a child’s autism, that a cabal of elites are harvesting children through human trafficking, and that sunscreen gives you skin cancer.

The video’s text reads: “Crunchy cult on Insta. This [poop emoji] is truly fucked.” The video then cuts to a screengrab of the parent’s autism-curing post, which reads, “When the neurologist and developmental pediatrician said you can’t heal autism….well we did!”

It appears that the screengrabbed post comes from TikToker @jodiemeschuk. In the video, she continues, “In a month that celebrates one of the greatest lies told to parents and one of the greatest tragedies [t]o happen to…children….I am here to tell you autism is not what they want you to believe it is and you can recover and prevent.”

@jodiemeschuk In a month that celebrates one of the greatest lies told to parents and one of the greatest tragedies to happen go children ….. I am here to tell you autism is not what they want you to believe it is and you can recover and prevent✌🏼 #befree #autism #heal #lies #guthealth #cleanlifestyle ♬ original sound – Scott Evan Davis – Composer

There are various other medical outlets that have echoed these sentiments, stating that the disorder can be lived with and autistic individuals and their loved ones can implement treatment plans that help them to better cope with and manage their autism, which manifests itself in many different ways.

Another highlighted post in Laura’s TikTok claims that children are being trafficked and having their adrenochrome sucked out of their bodies by “the elites” as a form of human sacrifice, which many have lambasted as a “Qanon blood harvesting conspiracy.”

The video featured other screengrabs that claimed AIDS is being slipped into vaccines, anti-gun control rhetoric, and another Jodie Meschuk post.

Commenters were shocked to see the claims made by the crunchy community.

One ex-crunchy creator said, “I always get comments: ‘there is no crunchy cult! You just had a bad group of friends…stop judging!'”

Another commenter said, “This kinda makes me really sad. Just when did we take a wrong turn?”

A third shared, “my cousin is a crunchy to Q victim. i feel so bad because i don’t know how to get her out”

Another agreed, “it made me sooooooo sad that people believe this.”

The Daily Dot has reached out to @iamlevelingup for comment.