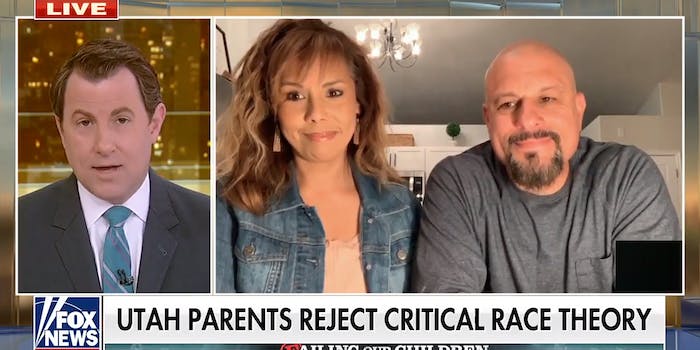 ‘My biggest fear is where this leads’: Anti-woke couple is trying to ban critical race theory in schools

'I've taught my son against that [Marxism.]'

“I found that they don’t call it the collegiate-level curriculum of critical race theory here, but it is still being taught in the Utah education system and, if anything, I would say it’s more than the California education system,” Vindas explained to Fox News, alongside her husband, Oscar.

Vindas says she had homeschooled her son since seventh grade “due to common core and critical race theory in California.”

She added: “What’s shocking is Utah is mirroring the education system of California, and I would say it’s probably the most progressive in the Western states when it comes to critical race theory and the school board are not listening to any parents, they just refuse to listen, and that’s what we found in California, which was one of the main reasons we decided to move here.”

“I’ve taught my son against that [Marxism], so I’d have to say my biggest fear is where this leads,” she said, somehow linking racial discussions with Marxism as essentially the same.

According to the Daily Mail, the Fox interview came about following Vindas’ addressing the Canyons School District board on behalf of Utah Parents United, an ultra-conservative, anti-mask advocacy group.

“Teaching on multiculturalism and respecting different cultures is one thing, but teaching that our Caucasian brothers and sisters are systemically racist because of the way they were born is also racist,” Gloria said in her speech, violently sloughing off a foundational history of racism in the Americas.

However, many see this attacking of critical race theory as a last-ditch effort for whiteness, as an idea, to maintain its already-loosened clutches.

Vindas’ (and others) ahistorical repositioning of moral high ground was criticized online.

Acclaimed author Frederick Joseph tweeted: “This war on Critical Race Theory and ‘cancel culture’ is literally just people who benefit most from white supremacy, the patriarchy, and capitalism saying ‘we refuse accountability and will do anything we can to continue destroying you.'”