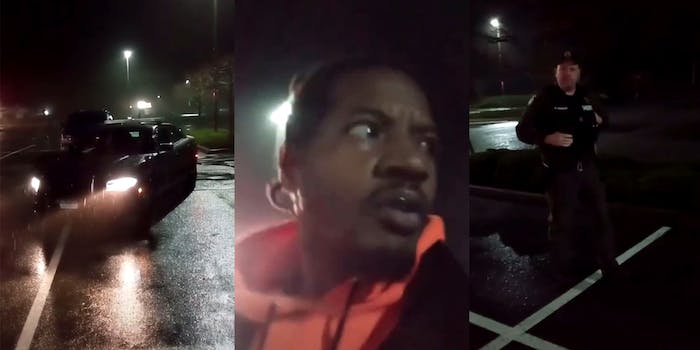 ‘This feels like a Jordan Peele horror’: Black man films ‘weird’ police interaction he had with 2 cops

A viral TikTok video shows a Black man being seemingly cornered by two police officers at night for no apparent reason. The police interaction has several commenters recalling a Jordan Peele horror.

A police interaction aggregator on TikTok, @stinkace2, posted the video to the platform on Monday, calling it “the weirdest police interaction I’ve ever seen.” The video has garnered over 2.4 million viewers, though it’s unclear where or when the incident took place.

The unnamed Black man filmed the interaction outside of a grocery store. “I’ve been getting following by this police officer. He hasn’t put his lights on; he’s a sheriff. I don’t know what he’s doing,” he says in the clip.

The police vehicle is parked in front of the man.

“Now he’s shining his light at me,” he continues. “I guess I had my hand in my pocket. He running my tags for something, for some reason.”

“All right, we have one here and one here. Ok, is there any reason for this contact?” the man asks the first officer.

“Can I get a name and badge number for both of you guys?” he asks.

“Sure, I’m Deputy Bond,” he replies while providing his badge number. The other responds, “Deputy Adam.” It is unclear what department they are with.

“OK, is there a reason for any of this here?” the man asks once more. They don’t respond directly, but they tell him their sirens aren’t on.

“I know they’re not on; I recognize that,” the man says. The lead officer tells him he’s not being detained and that “he’s free to go.”

“Why are you guys parked like this; like you’re not in a parking spot?” the man questions. “You’re parked blocking here. I’m just wondering…”

“You’re absolutely right, sir,” the officer replies. “You’re free to go; thank you, though, so much. You’re also free to stay.”

“I know I’m free to stay; that’s why I’m asking questions,” he says.

The officer says he is “confused.”

“You’re confused? I’m confused on why you’re parked like that,” the man replies. “And you’re both out of the vehicles.”

He proceeds to question their handling of the interaction.

“Deputy, I think we should probably go,” one officer tells the other.

The video ends with the officer thanking the driver.

Viewers are accusing the officers of trying to intimidate the Black man.

One commenter says they got “bad vibes, major bad vibes” from the interaction. Another said: This feels like a Jordan Peele horror movie before everything gets super messed [up.]” Another likened it to Get Out, calling the interaction was “scary.”

A commenter who claims they are a cop said, “This is in no way shape or from normal. Take this footage and file a complaint. This me an odd and eerie feeling.”

“It’s the gaslighting in his tone for meeeeee. Like he can’t at all understand why you’re confused,” another said.

The Daily Dot has reached out to the TikToker who posted the video for additional information.