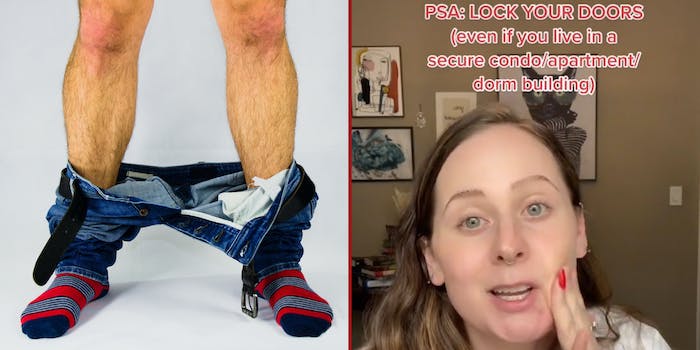 ‘I never feel safe’: Woman shares story about creepy neighbor breaking in with his ‘pants around his ankles’

'This is why it is all men. Because you have no idea who it could be.'

A three-part video series titled “PSA: Lock Your Doors” has gone viral on TikTok as user Sarah Biggers-Stewart (@thebiggersthebetter) shares a truly bizarre story about her neighbor allegedly breaking into her apartment.

The first video opens with Biggers-Stewart doing her makeup, saying, “PSA, lock your damn doors. Why, you may ask? Oh boy, do I have a story for you.”

Sarah begins the story with some context, noting this took place when she was younger and living in a condo with a concierge and security guard, which she describes as a “nice building.” She says she lived there for nearly a decade, noting that she felt “safe and comfortable” despite living near a man she presumed to be a “harmless” marijuana dealer.

She continues with the story, “One morning I wake up, I go towards the elevator, and I see a pile of dog shit, literal, actual dog shit, and the end of the hallway with a phone next to it.”

Sarah says she had questions. She continues, “I grab the phone, and by the way, this phone is like a red Razr flip phone, and we are well into the era of iPhones. … So I feel like this is a burner phone.”

She says she proceeded to pick up the phone and dial the last number, connecting to a young man who said, “Yo, Ethan, what up?” She explains that she just found this phone and asked who Ethan was, which makes the guy get “super sketchy,” according to Sarah, leading her to think it’s some sort of “drug dynamic.”

Sarah continues, “I find out Ethan is the guy on my floor with the nice car and reeks of weed, so I decide to just go bring it to him. I knock on the door, and he opens like five deadbolts… he opens the door [a small amount], peers out, high out of his mind, and takes the phone from my hands, shuts the door. Never says a word.”

She then says, “Just so we’re clear, this is all just context that’s necessary for the real story that involves this man about why you should lock your doors.”

Sarah then proceeds to part two of the story in a follow-up video, which details an incident seems to happen a bit after her original introduction to Ethan.

She begins, “So I wake up to this man standing over me with his pants around his ankles, and I’m like, this is it. This is my moment, and then, I realize that I recognize him.” Sarah shares that she recognized that it was Ethan, her neighbor from down the hall.

She continues, “I just assume, being naive, that he was fucked up and just had come into the wrong place. So I go, ‘Ethan, Ethan, you’re not where you think you are, like you need to go,’ and I start pushing him out. He looks me dead in the eye and says, ‘I know where I am. I know who I followed to get in here, and I’m not leaving.’ I was like, oh fuck.”

“Long story short, it took me about 10 minutes, but I was able to wrestle him down the hallway of the condo and out the front door… So I call our concierge/security and he comes up. He’s an ex-Marine, and I see him confront Ethan through the peephole of my door.”

Sarah details how the security guard confronted Ethan, who was still lurking outside her door. She says that the entire time, Ethan remained adamant and claimed he knew what he was doing, but “just wanted to talk” to Sarah.

She says as she waited for the police to arrive, Sarah realized that Ethan had looked around her home, smoked cigarettes, and rifled through her belongings before stripping down in her bedroom. She says as the police arrive, she asked how she can file charges only to be told she couldn’t and claims she was never given a clear answer as to why. Instead, she says the police recommended installing an alarm system.

Sarah moves on to part three, the third and final part of the video series.

She shares that, upon doing some research, she found out that Ethan was renting the unit he lives in while Sarah owns hers, so she began a process to attempt to get him removed him the space. She says she found the owner of the condo where he resides, and the two of them planned to get coffee.

She continues, “The man [who owned the unit] was definitely apologetic, definitely unnerved, but overall very protective, and I realized that there was a familial bond there. So it turned out that the homeowner was [Ethan’s] uncle.”

“The uncle is a lawyer…and me just being young, naive, uncomfortable, I ended up relenting and agreeing that he could continue living there if he didn’t talk to me and went to rehab. I didn’t hear from him or see him for a very long time. Eventually, I did run into him, he pretended he didn’t even see me,” she says.

She describes a weird incident with him, not too long after where her husband got on the same elevator as Ethan and Ethan proceeded to silently hand him a bag of weed gummies, which they believe may have been a proxy apology of some sort.

“One to two years later, I’m having friends over for a little friendsgiving thing, and I hear a knock on my door. I look out my peephole, and I see Ethan standing there, looking all agitated. When I tell y’all, my stomach just dropped. I ask my friends to line up in the hallway, as backup, and I open the door,” she says.

“He immediately starts walking in, uninvited, starts saying something in a very aggressive tone. At this point, the door opens just enough that he sees my friends, and he turns, looks me dead in the eye and goes, ‘Oh, wrong apartment’. That was scary as fuck,” she says.

She says she called security again, who came to talk to Ethan, who said the same thing to them as he did years ago, claiming he just needed to talk to her.

She finished the series with a simple sentence: “I moved out a few months later.”

One said “I refuse to interact with/befriend any of my (all male) neighbors for similar reasons. I come off rude I’m sure but I want to feel safe at home.”

Another commenter said, “This is why it is all men. Because you have no idea who it could be.”

One woman said, “I lock my doors, have an alarm system, and have internal/external cameras… I never feel safe. The system is broken.”

This story shines a light on the risks and harassment women face in their day-to-day lives. According to to RAINN, 975 out of every 1,000 perpetrators of sexual violence will walk free, and the majority of sexual violence goes unreported. Ninety-two percent of sex crimes are perpetrated by someone the victim knows.

The Daily Dot has reached out to Sarah Biggers-Stewart via email and TikTok comment. She did not immediately respond to our request for comment.

If you are a victim of sexual assault, harassment, or violence or want more information on sexual assault, contact the Rape, Abuse & Incest National Network at 1-800-656-HOPE (4673).