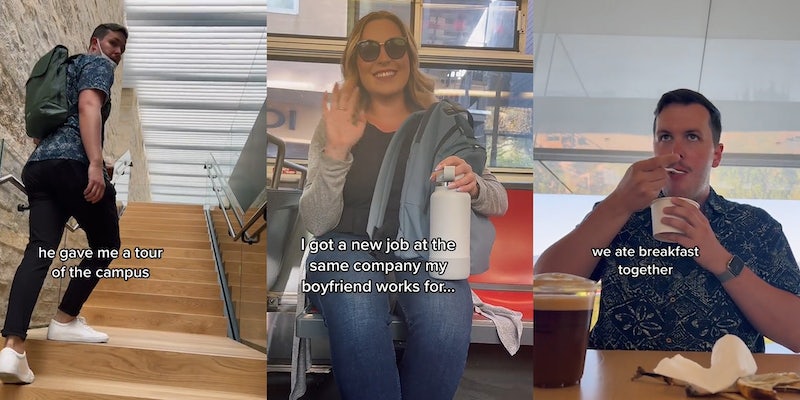 ‘Did you meet his work wife?’: Woman got a job at the same company as her boyfriend, sparking debate

A TikToker got a job at the same company as her boyfriend, which has sparked debate after the video went viral with over 700,000 views.

In the video, TikTok user @tayisreallycool describes her first day at a job where her boyfriend also works, and describes how they commuted together, he gave her a tour, they ate breakfast together, and then rode bikes together to their new office.

In the comments, users were divided over whether working with a partner generally was a good idea. “Damn, so it’s literally 24/7 with each other,” one user wrote. “This isn’t gonna end well,” another added, while a third user claimed it “would get old fast” because “you see them at home then at work.”

However, amid the commentary, a lot of users also shared their own positive experiences working with their partner, with one user dubbing the pair a “power couple” following the wholesome video.

“My boyfriend and I live together and work together,” one commenter wrote. “Our desks are 6 feet apart.” Another shared: “I work at the same office as my husband and the commute is my favourite part, but in general, I love that we get to see each other through out the day.”

A third commenter added, “My wife and I work at the same place too. People always ask how we can do that, but we just can. Never bothered either of us.”

The TikToker didn’t immediately respond to the Daily Dot’s request for comment via email.