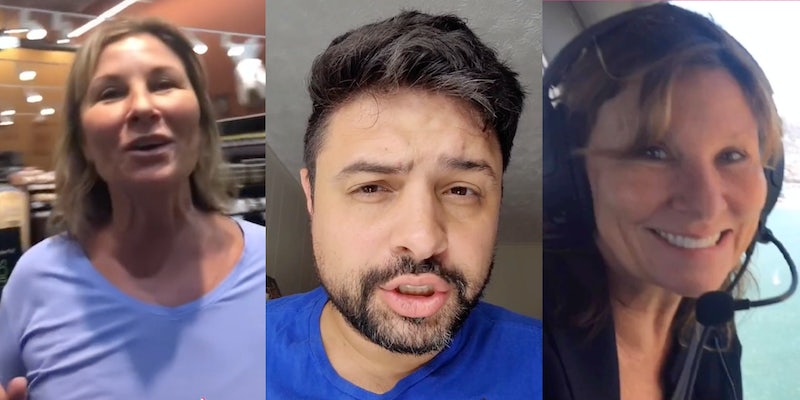 The woman, once identified, was reportedly let go from her job.

It took less than a week for the internet to track down “Coughing Karen,” a woman seen in a recent viral video following and coughing on a mother and daughter in Lincoln, Nebraska. The woman, once identified, was reportedly let go from her job.

Within days of the video going viral, internet sleuths had identified the woman as Janene Hoskovec, an Arizona native and employee of SAP, a software company based in Germany. Several news outlets, like Heavy and the Phoenix News Times, have reported on her identity since. She was first identified by TikToker @thatdaneshguy, who often makes headlines for his videos exposing people like anti-maskers and racists.

Danesh posted a video to his account on Sept. 7, exposing the woman as Hoskovec. He noted that he collaborated with another TikToker, @guilt, to track down Hoskovec’s information. A longer video, posted to Danesh’s Instagram, clarifies that Danesh and @guilt did some extra digging following the initial video’s upload. That’s because they discovered that Hoskovec has a sister living in Nebraska, and—on the off chance that the woman was actually a twin sister to Hoskovec—Danesh briefly took down the original upload while he investigated. Noting that “its more important to make sure you’re not wrongfully accusing someone, than being the first to identify someone,” Danesh dug into the potential that Hoskovec wasn’t actually at fault.

A quick search determined that Hoskovec was, without a doubt, the woman seen in the viral video, leading Danesh to reupload the clip. Within hours of Danesh’s upload, SAP posted a response on Twitter, writing that the company was “taking the matter of an SAP employee incident very seriously” and that an investigation was underway.

Later that same day, SAP updated its Twitter with a final decision. It told the eager masses following the story that the company had “reviewed the incident and can confirm that the individual in question no longer works for SAP.”

Some felt the firing wasn’t enough, however, and called for Hoskovec to face legal consequences for her behavior. A few even reported her to the local district attorney’s office.

Everyone else, viewing the entire situation as an excellent example of “fuck around and find out,” simply shared their delight that Hoskovec faced consequences. Danesh was among them, sharing two victory clips in close succession. The first, set to the Game of Thrones theme, sees Danesh victoriously display his response to the SAP Twitter announcement, which made use of the heavily memed moment from season 7 in which Olenna Tyrell tells Jamie Lannister to “tell Cersei. I want her to know it was me.”

In his second victory lap, Danesh shared a headline identifying Hoskovec and screenshots of SAP’s termination tweets. The entire TikTok is fittingly soundtracked by the popular “Consequences” soundbite from comedian Charles Osborne.

In the original video, which occurred at a Super Saver grocery store on Sept. 3, Hoskovec can be seen following a mother and daughter and deliberately coughing on them. She attributes her actions to “allergies” through a gleeful smile, and calls the others “sheep” for continuing to mask during a global pandemic.

News of Hoskovec’s termination spread quickly across the internet. On Reddit’s r/FuckYouKaren, a post regarding the incident collected joyful responses from commenters. Noting that “sometimes the internet can be used as a force for good,” people congratulated SAP for being “an employer with social responsibility.”

The Daily Dot was unable to reach Hoskovec for comment as her social media pages appear to be deactivated. We reached out to Danesh, however.