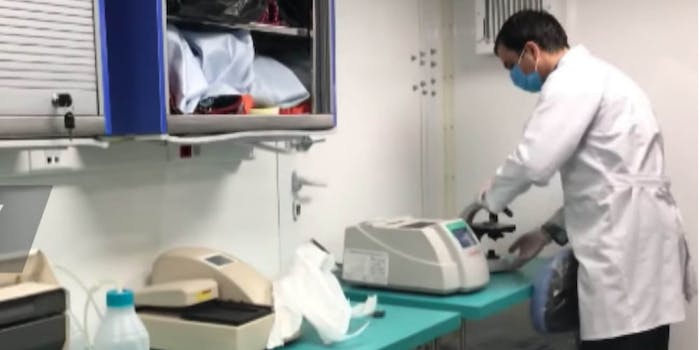 The unconfirmed leaked video appears to show as many as 50 body bags on the floor.

A video circulating online this week purports to show a hospital in Iran filled with the bodies of coronavirus victims.

Posted to Twitter on Monday, the footage was allegedly captured at a medical facility in the city of Qom.

The video, which has not been authenticated, begins by showing what is claimed to be numerous individuals in body bags surrounded by healthcare workers adorned in protective gear.

The same scene can be witnessed in a second room, as the video’s creator can be seen pointing to alleged body bags covering the floor.

A third room looks much the same, with what appear to be two wooden coffins near the far wall.

In total, assuming the bodies are real, the video showcases close to 50 deceased individuals.

Iran has been one of the hardest-hit countries since the coronavirus outbreak first originated in Wuhan, China.

While the latest numbers show that there have been 2,336 confirmed cases with 77 deaths in Iran, the BBC reported last week that the actual death count could be as high as 210. The unconfirmed numbers, provided to the BBC by health official sources in Iran, would likely be significantly higher at this point if accurate.

The Middle Eastern nation also revealed on Tuesday that 23 members of its parliament have tested positive for the disease.