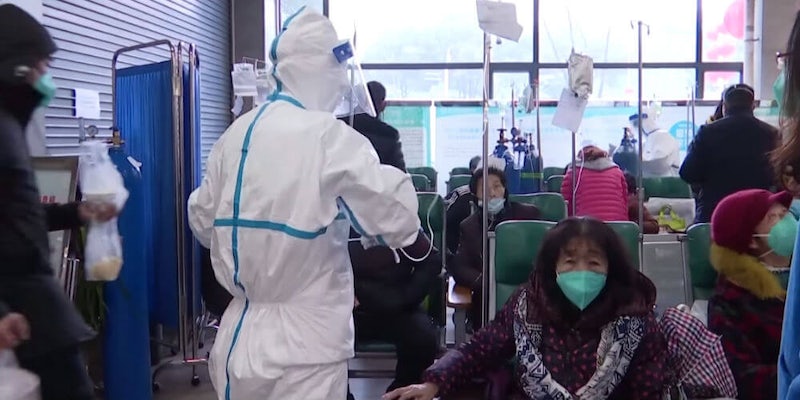 An alleged nurse posted the video and said 'everyone will end up being infected and dying.'

The coronavirus outbreak is getting worse by the day.

A viral video—which can be seen on YouTube and Twitter–shows corpses of coronavirus victims lying in the hallways of a hospital in China.

The video was filmed by a woman who claims to be a nurse inside Red Cross Hospital in Wuhan, where the virus originated, the New York Post reports. Storyful verified the video on Friday, it reports.

The now-removed video was initially posted to Weibo, the Chinese equivalent to Twitter.

According to the Daily Mail, the nurse in the video describes how patients are being sent to the hospital without any quarantine measures. “Everyone will end up being infected and dying,” the worker warns.

“Three corpses, [they] have been lying here all morning. Some of them died in the wee hours. Nobody has come to deal with [them] yet,” says a voice from behind the camera, according to Daily Mail. “And doctors, nurses and patients, they all work in such an environment. This is what is going on in a designated hospital. Not a single person is here to manage.”

In addition to the video footage, the blogger wrote a post asking the public to “save the people of Wuhan.”

The virus is spreading so fast in the city that officials are scrambling to build a 1,000-bed hospital to address the burgeoning patient population. Forty-one people have died as a result of the disease, and at least 1,400 others have been infected, according to CNN.

At least five cities in China have been placed on lockdown since the disease broke out, with airports, buses, and subway systems suspended in an effort to try and contain the outbreak.

As of earlier this week, cases were confirmed in China, Taiwan, Japan, Thailand, South Korea, and the U.S., according to the Center for Disease Control.