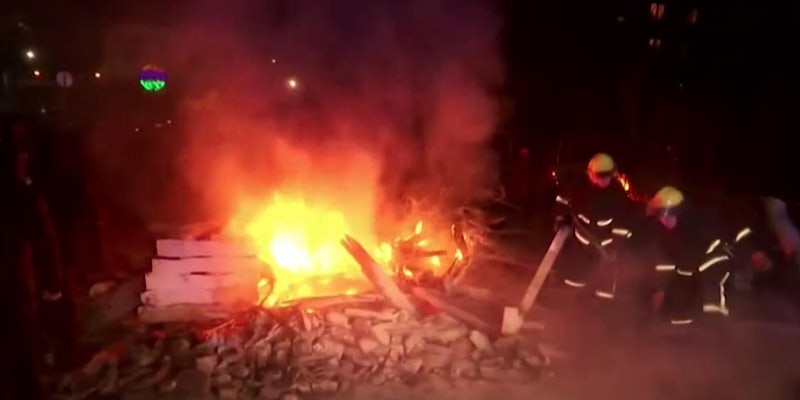 Riots break out after a fake email about coronavirus went viral

A mass email sent out to Ukrainians falsely claimed that there were at least five reported cases of coronavirus in Ukraine, leading rioters to attack hospitals and burn blockades on Thursday.

The email was purported to come from Ukraine’s health ministry and sent to its entire contact list, and it went out on the same day that about 70 evacuees from China arrived in the country, according to BuzzFeed News. Yet, the email came from outside of Ukraine, according to a statement by the Security Service of Ukraine (SBU).

The windows of buses transporting the evacuees to quarantine facilities were smashed in with rocks, Reuters reports. And while two Ukrainians have had the virus that has claimed more than 2,000 lives, neither individual is in the country and both have recovered.

The Guardian reports that the citizens of Novi Sanzhary, a village in central Ukraine, barricaded the road to prevent evacuees from reaching the sanitarium they were intended to stay at. Ukrainian authorities reportedly screened all passengers twice, which was apparently not enough to appease the rioters.

Reuters reports rioters objected to the housing of the passengers, suggesting they instead be kept at Chernobyl, the site of the 1986 nuclear explosion, which remains the most disastrous nuclear accident on record. Others suggested Ukrainian President Volodymyr Zelensky house them himself.

Smaller protests also reportedly broke out in nearby villages at the thought that the evacuees could be quarantined there instead.

According to the Guardian, Ukrainian Prime Minister Oleksiy Honcharuk is headed to the area to oversee that evacuees safely make it to quarantine.