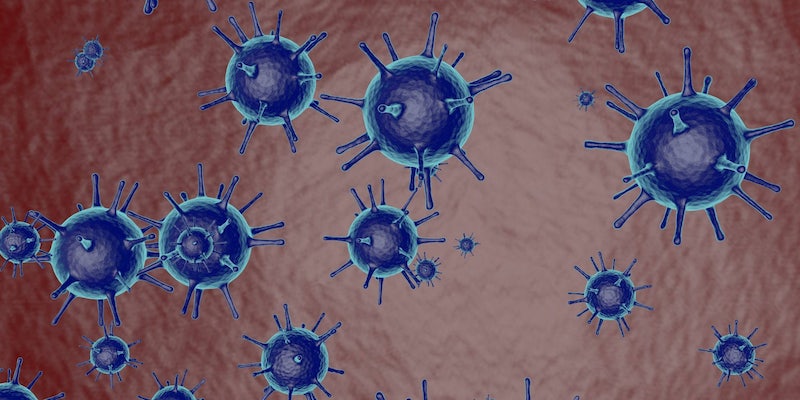 Why the coronavirus bioweapon theory persists

If it is one, it's not particularly effective.

Every day brings more details and more victims of the spreading COVID-19 outbreak, best known as the coronavirus.

What started off in December as a novel form of the common coronavirus has—as of this writing—73,000 confirmed cases and nearly 2,000 deaths.

Even though we’re getting a constant stream of updates on quarantines, evacuations, and deaths, we still know almost nothing about how the outbreak began. And this information vacuum has played host to an outbreak of a different kind: conspiracy theories claiming the pandemic is an engineered weapon of mass destruction that escaped its creators and is wreaking havoc around the world.

Researchers originally pinned the starting point of the novel coronavirus as a snake that was eaten at a seafood market in Wuhan, the huge city in central China where the outbreak has been clustered and whose residents have seen the brunt of it.

Other scientists didn’t believe the origin to be snakes, saying it jumped to humans either from bats, or the endangered mammal the pangolin. Even as work on a vaccine continues, the research into its origins has proven inconclusive.

But for every hypothesis about how the virus jumped from animals to humans, there seems to be a conspiracy theory that it didn’t have a natural origin at all. Rather, it was engineered in a high-level biological warfare laboratory and funded by genocidal billionaires, designed to spread quickly and kill efficiently.

And there just happens to be one of those laboratories deep underground in Wuhan.

The irony that there is a real biosafety level 4 lab (denoting the safety measures needed to study potential biological weapons like smallpox and Ebola) in the exact same city where a massive outbreak is going on hasn’t been lost on people.

That lab, the Wuhan Institute of Virology, has existed in some form since the late 1950s, and most recently has done research on bat-transmitted coronavirus—the same kind currently infecting people as COVID-19. But lab officials have strongly denied any link to the outbreak, and science writers have pointed out that coronavirus commonly jumps from animals to humans and that the virus currently spreading has too low a lethality rate and too long an incubation period to be useful as a weapon.

But the public doesn’t love scientific details and critical thinking as much as it loves lurid accusations and coverups. So the bioweapon hypothesis has found a home among a mix of conspiracy theorists, American conservative politicians like Sen. Tom Cotton (R-Ark.), online doom prophets, Russian disinformation bots, and on social media fora.

It’s also spawned a host of adjacent fears that the path the outbreak has taken is the same one that a bioweapon attack would take. According to the anti-WMD think tank the Nuclear Threat Institute, the most efficient way to spread a biological agent would be through aerosol spray. But COVID-19 isn’t spreading that way, so it would need some other transmission method—something fast, efficient, and able to infect a lot of people before a treatment can be found.

And so, the media has gone wild over terms like “super-spreader,”“re-infection,” and “invisible transmission chains”—all supposedly nefarious ways for a biological weapon to spread quickly without an obvious attack. Meanwhile, online commenters marvel at how fast the virus has spread among passengers on the quarantined cruise ship Diamond Princess, and point out new victims outside China who had never been there, including an elderly woman in Japan who was diagnosed with COVID-19 after her death.

All of these theories paint a disturbing picture of a weapon that spreads much faster than we know, and kills more readily than we’ve been told. But it should be pointed out that so far, all of the rumors that COVID-19 was engineered in a lab are just that—rumors. Most are based on a misunderstanding of how pandemics work and how biological weapons are delivered, as well as Western distrust of Chinese media and science.

The two closest predecessors to the COVID-19 outbreak, the SARS virus of 2003 and the MERS outbreak of a decade later, were both natural coronavirus variants known to have jumped from animals to humans. Beyond that, a number of researchers have pointed out that if the new outbreak were actually a bioweapon, it’s not a very good one because of how relatively slowly it moves and its low fatality rate. As MIT professor Vipin Narang told CNN in reference to Cotton’s claims, “If you were engineering a bioweapon, this would have the absolute opposite of the characteristics you would want.”

Beyond that, many of the subsequent fears about the speed and lethality of the virus are overblown or have been debunked.

For COVID-19 to be an efficient bioweapon not spread through aerosol, it would need to be able to jump quickly from victim to victim—the way legitimate biological agents like plague and smallpox do. S

Sure enough, the idea of a “super-spreader” capable of infecting countless victims secondhand took off in U.K. media thanks to a man who picked up the coronavirus on a business trip to Singapore. After that trip, the patient first traveled to France, then returned to England, infecting as many as 11 people total before his own symptoms began to manifest. That patient recovered, but news stories breathlessly referred to him as a “super-spreader” who was somehow more genetically prone to passing the illness on.

But a real biological weapon wouldn’t depend on a superspreader, as it would take too long and be too inefficient. A weapon that infected less than a dozen people over a week-long period has little use in combat. It’s far more likely that his higher rate of infecting other people came from making several short flights over a few days and staying in confined spaces between those trips, all while he wasn’t showing signs of the illness. And none of the people he infected have died, since they were all able to start treatment once they realized they’d been in contact with the “super spreader.”

And while “re-infection” is a scary concept that implies that COVID-19 is a relentless killer, it’s not a particularly relevant concept to bioweapons. In fact, a biological agent that needed two tries to kill a victim would be as useless during war as one that needed a “superspreader.”

It’s common for someone who got a viral illness to get it again. In particular, the anti-bodies for this coronavirus don’t last long, meaning the body’s ability to fight it off wears off quickly and leaves patients vulnerable to re-infection, even if it’s harmless. The virus is simply too new to have any long-term data about whether survivors will have immunity to it in the future.

Finally, “invisible transmission chains” are another scary term that implies some kind of silent and deadly weapon. But again, this is common in viral illnesses where asymptomatic people can pass on an illness without any of them knowing they’re sick. This is a hallmark of an inefficient, and therefore natural, disease outbreak. Regular hygiene and containment can help break these chains, and this method of transmission has been studied since at least the early 1990s. It sounds scary, but it’s basic science.

And the woman in Japan who had never left the country but still died of the illness turned out to be the mother-in-law of a taxi driver who had unknowingly driven infected Chinese passengers. Again, the vector of transmission is clear, proving COVID-19 can be caught fairly easily, but not easily or quickly enough to be useful as a weapon.

Despite all this evidence against COVID-19 being a bioweapon, the possibility can’t be eliminated entirely because there is no proven hypothesis as to where it came from.

Without a confirmed origin story, it’s not possible to rule out unconfirmed theories. But that doesn’t mean they’re true, and in this case, the speculation doesn’t do much to prove that COVID-19 is some kind of WMD that’s gotten away from its creators. In fact, these rumors probably prove that it’s natural, as a bioweapon dependent on “superspreaders” and infecting people twice is too slow and docile to be useful as a weapon.