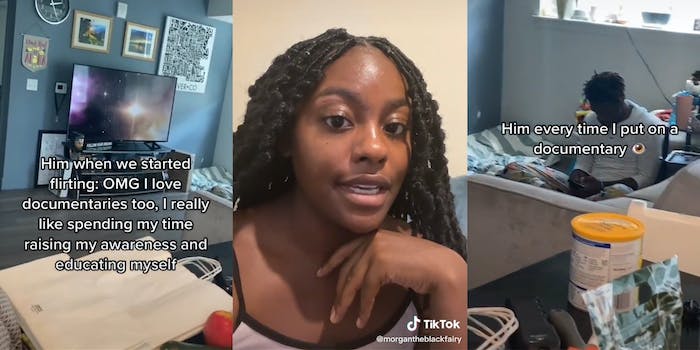 'I ain’t know checking the phone was that deep.’

In a viral TikTok video, Morgan McCane (@morgantheblackfairy) explained how she depicts whether the person she is talking to is actually interested in her interests or if they just want access to her.

The video was stitched with another video from a fellow TikToker that showed the guy she is apparently dating and how he said that he loved documentaries. But as a documentary was on, he was on his cell phone.

The clip has garnered 1.2 million pageviews since going live four days ago.

In her stitched video, McCane explained how she always tests a new guy that she is feeling by mentioning that she loves the movie Coraline where then a lot of men agree with her and say the same thing, which opens the door for them to get together and watch the 2009 animated film.

Eventually, if she decides to let them come over to her place, she puts the movie on for about 30 minutes where she then says she is going to the restroom, but she is actually peeking around the corner to see if they are still watching the movie. Morgan then goes on to say that the majority of the time, they are on their phone and when she returns to see if they are enjoying it, they then lie and say they love it and can’t keep their eyes off of the screen.

This ties into the debate that oftentimes, men will just mirror the interests and likes of the person they are dating to get access to them.

Users in the comments had several opinions on the topic.

One user commented, “Yes, if they’re actually interested, they’ll learn more or listen. If they’re faking, they lie about liking it already.”

Another user said, “I don’t know, I mean, I’d get on my phone too if the person I was watching a movie [with] left, especially a movie I already know, like I’ve seen already.”

Someone else commented, “I ain’t know checking the phone was that deep.”

The Daily Dot reached out to Morgan via Instagram on the topic of mirroring and dating.

McCane said that she started doing this because she found herself in situations where the guys she dated mirrored on her and then there was a switch later into their relationship. It prevented her from knowing the real them so she decided to put this test in place to depict their true intentions and not waste her time.

Her experience has taught her that people will lie to you early on to make you comfortable to feel as though you have met your match when in reality, they take on this façade and when it is removed, people are shocked because they are exposed to the true version of this person.