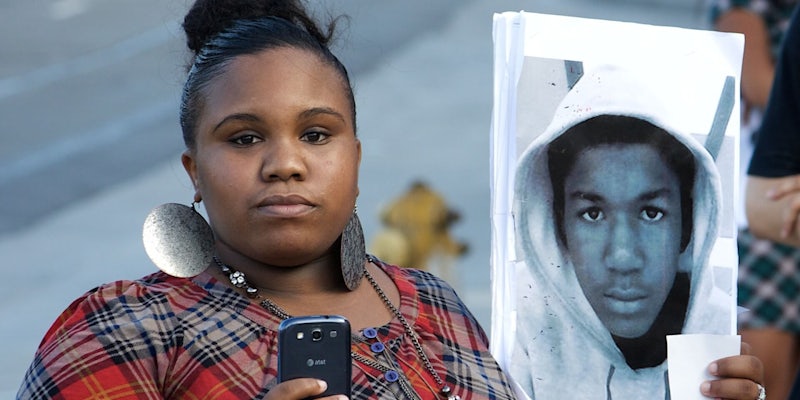 The documentary aims to discredit witnesses in the Trayvon Martin murder case.

A nonprofit theater in Coral Gables, Florida, has canceled the screening of a documentary that aims to discredit the witnesses in the Trayvon Martin murder case.

The cancelation follows massive backlash online, especially after George Zimmerman, the man who fatally shot Martin, filed a $100 million lawsuit against the Martin family and other witnesses.

Zimmerman’s lawyer Larry Klayman announced the screening of The Trayvon Hoax: Unmasking the Witness Fraud that Divided America, a documentary by Joel Gilbert, on his website Wednesday, along with the lawsuit announcement.

The lawsuit argues that witnesses, such as Martin’s mother Sybrina Fulton and his girlfriend Rachel Jeantel, have either “known about or should have known about the witness fraud, obstructed justice, or lied repeatedly under oath in order to cover up their knowledge of the witness fraud.”

Billy Corben, a film director, tweeted criticism at Coral Gables Art Cinema for “hosting this disgraceful sham.” Corben attached a screenshot of the media advisory for the event.

“I’m not calling for a boycott—everyone can make their own decision—but I will NEVER attend another event or screening at @gablescinema after this,” Corben wrote in a follow-up tweet. “And I think their sponsors and landlords at @CityCoralGables should take a hard look at this organization.”

Merely two hours after Corben called it out, the cinema announced it was canceling the screening.

“We’re a nonprofit, part of our revenue stream is venue rentals–private individuals and filmmakers use the cinema when we’re not showing movies,” Brenda Moe, Coral Gables Art Cinema’s executive director, told the Daily Dot on Wednesday. “Individuals can rent the cinema for private events. Those don’t go on our website, [and] we have no association.”

Coral Gables Art Cinema was not aware of all of the details surrounding this private rental and has made a decision to cancel the rental. https://t.co/bpgmbT3Df7

But many on Twitter are not buying the cinema’s alleged ignorance.

“The title of the film said it all, but cool get your publicity,” Twitter user @Misss_T_ wrote.

Right? I honestly feel like they’re jumping ship before the backlash comes

Yall knew, you just figured no one would notice……

You just pressed because you got caught

The title of the film said it all, but cool get your publicity.

I implore you all as @gablescinema is in fact a nonprofit organization, to reach out to the programming team, the Executive Director and board of directors as to how the "Trayvon Hoax" ft. George Zimmerman was even approved for rental. https://t.co/8Wbu34qVbt

To be clear: what details were you aware of?

Moe told the Daily Dot that once the cinema learned of the documentary’s details, it decided to cancel the rental. Moe said the cinema isn’t aware of the content being screened when it comes to private screenings.

“This is part of our business model; we rent the cinema the same way as a hotel that rents out its conference rooms,” Moe said.

According to the cinema’s website, it costs $200 per hour to screen a film, with a minimum of two-hour screening required.

Moe told the Daily Dot that “no transaction” had been made. Klayman’s group had only booked the place.

“[The] only thing we were involved in was that someone wanted to use the cinema for a private event,” she said.

The Daily Dot has reached out to Klayman’s office.