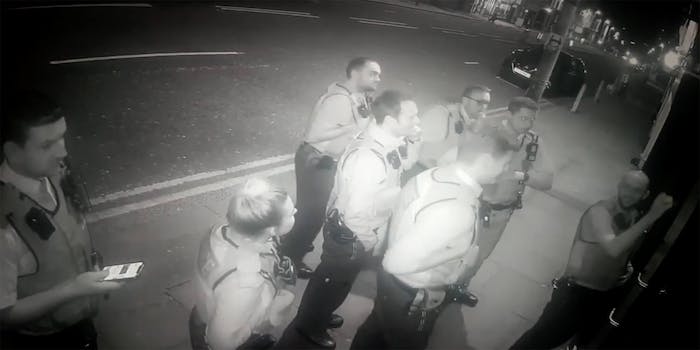 'They must have been baffled.'

Police raided an empty comedy club after a community member reported a Facebook video stream of what they believed to be a live show.

According to Metro, the “concerned citizen” reported a Facebook video of a live show at the Hot Water Comedy Club in Liverpool, England. Local police, believing the club to be defying the coronavirus lockdown order, sprang into action.

Video caught on the club owner’s CCTV shows a dozen officers swarming the comedy club and banging on the door. The club appears to be closed and empty. Eventually, one confused officer pulls out his phone to view the Facebook video in question before they all give up and walk away.

Club owner Paul Blair told Metro that he was “in shock” when he saw CCTV footage of the scene outside his club.

“You could see vans and a dozen officers popping up out of nowhere,” Blair said. “I couldn’t believe what I was seeing. They must have been baffled when they arrived at the scene.”

Blair said the raid was all the more confusing because he made a point to advertise the streamed shows as “pre-recorded.”

But he said the incident was a well-needed laugh, especially for comedians who have been financially impacted by the pandemic.

“It’s been a hard time for comedians and comedy clubs, it’s been no laughing matter,” he said.

A spokesperson for the Merseyside Police addressed the officers’ lack of social distancing in the video, according to Metro.

“Police officers are key workers with a critical role in protecting the public during the coronavirus situation, and whilst they do practice social distancing wherever possible, their role in responding to calls for service from the public, means it is not always possible,” the spokesperson said.