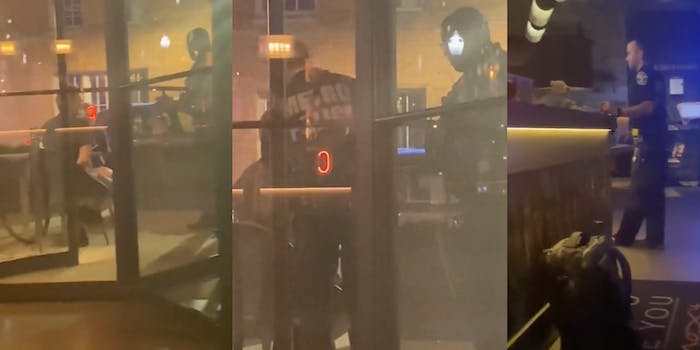 The man and woman had never met, but the cops still accused him of being her accomplice.

A viral TikTok video shows police officers in Louisville, Kentucky handcuffing a guest outside a hotel, apparently for no reason at all.

Emily Oberhausen posted the video on Monday, which has since been viewed more than 60,000 times.

The video shows who Oberhausen says are members of the Louisville Metro Police Department (LMPD) speaking with a man and a woman in handcuffs, outside the revolving door of the Moxy Louisville Downtown hotel.

The conversation between the officers and the man in the video are inaudible. Oberhausen, who is narrating the incident, says the man and the woman don’t know each other and that the man, a regular at the hotel, was simply paying his taxi driver when he was cuffed.

“The man just flew into Louisville, Kentucky last night to stay at this hotel,” she says, adding that her spouse works at the hotel.

She says that the man—who had flown internationally—got out of his taxi, brought his luggage in, and borrowed some change from the front desk as he had not exchanged his currency at that point.

When he went out to pay his taxi, LMPD “rolled up on a woman walking on the sidewalk and saw the taxi in the middle of the street,” Oberhausen says.

She also says that the woman in question did not clarify that she did not know the man. There were no further details available on the issue. Oberhausen did not respond to the Daily Dot’s request for comments.

Staff at the Moxy Downtown Louisville confirmed that the incident happened on two ocassions, but did not respond to the Daily Dot’s request for further information at the time of publication.

LMPD has come under intense scrutiny this past year following the killing of Breonna Taylor in her own home while she was asleep in March 2020. Her death garnered national attention in the following months as the police killings of Ahmaud Arbery in Georgia and George Floyd in Minnesota sparked a national movement against police violence.

The Daily Dot has reached out to LMPD about this incident and will update the report if they respond.