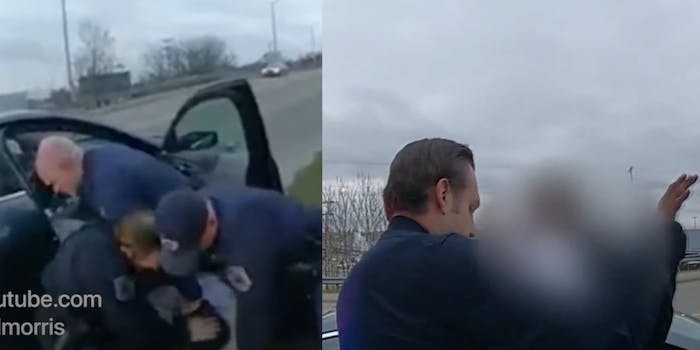 Two other cops held the man down.

A video shows a Michigan officer repeatedly punching a Black man in his face and chest while two other officers hold him down during a traffic stop for alleged littering.

The man has been identified as Diabate Hood, who was in the car with two other men—one Black man and one Latino man—as they were driving in Grand Rapids, Michigan, according to WFLA.

The video of the March 26 incident was published by WFLA on Thursday.

Several police cars and multiple officers with the Grand Rapids Police Department (GRPD) can be seen responding to the incident in the video. The video was extracted from one of the officer’s body cameras.

In the video, several officers can be seen on both sides of the vehicle. An officer asks the person in the passenger’s seat—who police reportedly accused of throwing something out of the car window—to step out of the vehicle. The person complies and puts their hands up.

Several officers are also seen next to Hood, who is in the driver’s seat. According to WFLA, Hood wanted to know why showing his license wasn’t enough for them.

In the video, Hood then apparently tries to get out of the vehicle through the passenger’s side when three officers stop him. Two hold him down, and one officer begins to punch him.

The officer punches him eight times while Hood screams in pain. “I didn’t do nothing!” he screams.

Per WFLA, the police department said in a Wednesday statement that the men were initially stopped for alleged littering, but it’s unclear how the situation escalated. The Daily Dot reached out to the GRPD and will update this report if the department responds.

In another part of the video, a gun can be seen on the trunk of the car. According to WFLA, four guns were found, but only one is seen in the video.

The three men were reportedly arrested and charged with felonies, though it’s unclear what their exact charges are.

The men, according to WFLA, believe they were racially profiled. The men’s lawyer, Attorney Tyrone Bynum, reportedly said that the officers treated the stop as a “felony-type stop” and is demanding to know how the incident escalated. “My point is why are we to this point anyway? This is a felony-type stop. Why are we asking these guys to get out of the vehicle? Why are we handcuffing them?” he questioned, according to WFLA.

Police Chief Eric Payne defended the officers’ actions in a statement on Wednesday, per WFLA.

“This is the police work that I expect from my personnel,” he said in the statement. “I have made the enforcement of violent crime and the recovery of illegal firearms one of the departments top priorities.”

Initial reports didn’t clarify if the firearms were illegal or not.