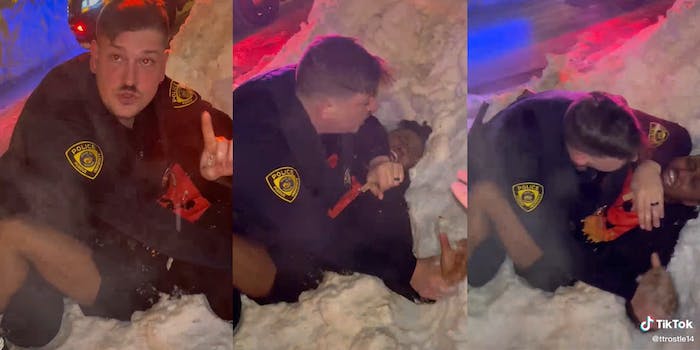 ‘There is absolutely zero context that would make this acceptable’: Black man begs cop to ‘stop’ as he presses into his neck, lies on top of him

A Purdue University police officer was filmed forcefully lying on top of a Black man and holding his arm against his neck.

The video was reposted by Tyler Trostle (@ttrostle14) to TikTok.

She persistently asks the cop to get off of her boyfriend. Tuggle also tells the officer that he is hurting him and asks him to “please” stop. The officer then puts his hand near Tuggle’s mouth. When the girlfriend taps the cop asking him to stop, he says he is going to tase her.

The girlfriend then tells other cops, who are now approaching the scene, that the officer is “taking it two far.”

The video was posted on Feb. 9 and has been viewed over 6 million times. According to WRTV, a local news outlet in Indianapolis, the video was taken on the evening of Feb. 4. WRTV reported that the incident involved an arrest.

Trostle commented on the video clarifying that it was not their video and that they posted it “to raise awareness to bring justice.”

“Every person in this video is trying to de-escalate except for the officer,” they commented.

“There is absolutely zero context that would make this acceptable,” TikTok user @mdsyre commented on the video.

“The fear in his voice,” @mary.lars wrote. “The context doesn’t matter.”

In a follow-up video, Trostle posted an alleged statement from Tuggle, who said, according to the screenshot, that someone called the police on him during an argument he was having with his girlfriend.

According to a screenshot of the statement, he said the officer arrived “on the scene and was completely out of pocket toward me probably for being Black.”

“Without even talking to me this pan punched multiple times, elbowed me in the face, smothered my face in the snow, and even was choking me multiple [times],” the statement continued.

He made similar remarks in his Instagram post, saying, “Purdue police refuse to give me body cam footage and have concluded Officer Selke “did no wrong”. Help me get justice and hold this man accountable.”

WRTV reported that footage from the officer’s bodycam has not yet been released and that Purdue University Police Department Chief John Cox said at a briefing on Feb. 9 that an internal review is in progress and that “no injuries were reported.”