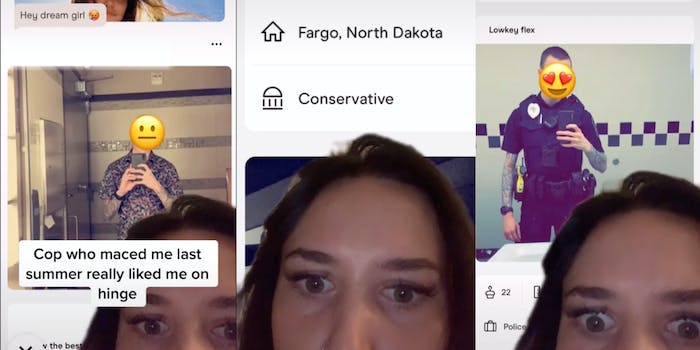 'Don't you know if he maces you it means he likes you?'

A TikToker allegedly matched on Hinge with the police officer who maced her at a Black Lives Matter rally last summer.

TikToker @camidoublewami shared the story to her 34,000 followers on Wednesday. Using the green screen feature, she overlaid a brief video with the cop’s Hinge profile and the resulting direct message conversation. As of Thursday morning, it’s got 2.4 million views.

Set to the jarringly recognizable theme from Psycho, the video begins with a simple text overlay.

“Cop who maced me last summer really liked me on Hinge,” the overlay reads. In the background of the shot, a thoroughly tattooed officer can be seen posing in front of a mirror in uniform. His profile pins him as a 22-year-old, 5’9 cop from Fargo, North Dakota. He makes sure to include that he is “conservative” too.

Cami’s face hovers in front of the green screen the entire video, eyes wide and horrified as she reads the officer’s introductory message: “Hey dream girl.”

Cami’s response went straight for the jugular. “You were the one who maced me at the BLM rally right?”

The video ends there, leaving many viewers thirsty for more. There is no follow-up video, which curious viewers absolutely cannot abide. They’ve riddled the comment section with requests for more info, along with jokes and recomendations for what Cami should do next.

“Meet up and mace him back,” one commenter helpfully suggested. Another recommended she “play him, make him fall in love, then dip.”

Nearly the entire comment section endorsed the idea of a meet-up with nefarious intent. Some even suggested she take it all the way to a proposal before initiating her revenge, but others were too off-put by details in his profile to think a meet-up was worth Cami’s while. Namely, his height.

Commenters weren’t at all surprised to discover that “of course he’s 5’9,” but many still took delight in roasting the cop for his height and political leanings. “5’9 and conservative,” one commenter wrote. “Pick a struggle.”

In a pair of clarifying comments, Cami informed her eager followers that there would be no part two. “I don’t feel like making another video bc its not worth it so pt 2 he said: you know it,” she wrote. She also noted that she was banned from posting and so couldn’t share the direct message conversation.

Cami’s clarification on the short-lived conversation did nothing to discourage eager commenters, who continued to recommend Cami “ruin his life” in one way or another.

We reached out to @camidoublewami.