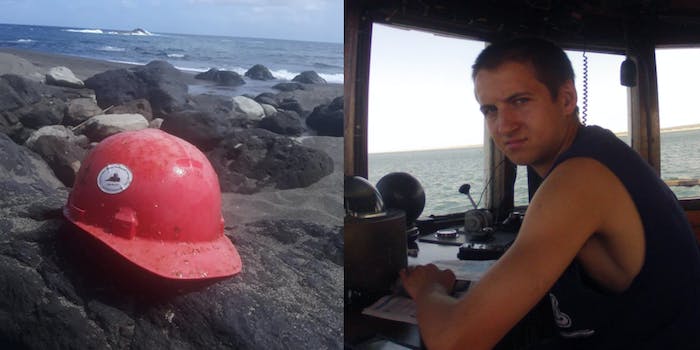 The day the memento was lost, Roy Jr. and his son were working together at a New Bedford work site. Roy Jr. lost his son later that same year.

The death of Conrad Roy III made consistent headlines between 2014 and 2020. The 18-year-old died by suicide. Messages from Michelle Carter, his girlfriend at the time, were found on Conrad Roy’s phone, and she was accused of encouraging him to die by suicide. During a phone call between Roy and Carter, she told him to get back inside his truck as it filled with carbon monoxide. He died in July of 2014, and Carter subsequently served approximately 11 months of a 15-month prison sentence after being found guilty of involuntary manslaughter. She was reportedly released early for good behavior.

On Sunday, nearly seven years after his son’s death, Roy Jr. received a long-forgotten remnant of his son via the magic of the internet. A woman named Sandra Machado reached out to Roy Jr. on Facebook after she discovered a hard hat washed up on a beach in Portugal.

“Conrad Roy JR your helmet arrived to the Azores,” she wrote on the Facebook post. “Found today at 11:30 on the beach of mills Porto Formoso island.”

Machado was delighted to learn about the significance of the hard hat after connecting with Roy Jr. “I am happy for helping the family to have some kind of peace,” she said.

The day the hard hat was lost, Roy Jr. and his son were reportedly working together at a New Bedford work site. Roy Jr. lost his son later that same year. He said the timing of the hat’s appearance felt like a gift from Conrad Roy.

“I’m happy today because it felt like he brought that to me,” he said. “I think my son’s story was such a negative story and just a sad story, and I think this brings a little happiness to somebody on Father’s Day.”

Roy Jr. has yet to collect his hard hat, but he reportedly has plans to travel to Azores soon.