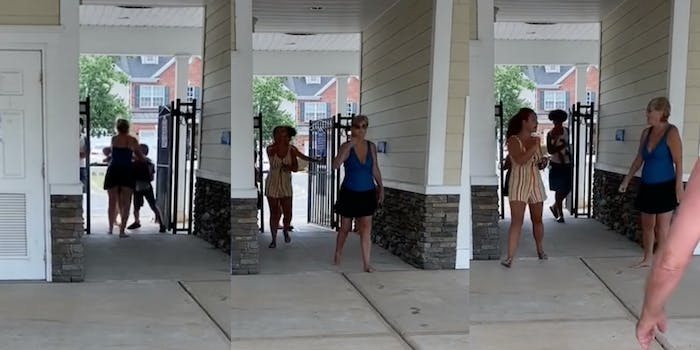 The woman has allegedly been blocking 'children who aren't white' from accessing the pool.

A viral video shows a white woman, dubbed a Karen by the internet, attempting to dictate who has access to the community pool.

By the time the video, uploaded by user @hj_everyday—who goes by Heather J. Brown on the platform—starts, the confrontation is already underway. Shot from a distance, the video sees the woman standing in front of a gate that provides access to the community pool. She is arguing with Brown, who notes that her child—the same one the woman is presumably denying access to the pool—was “here yesterday,” and reminds the woman that the two have met before.

The contentious conversation between Brown and the woman is abruptly cut off when Brown’s 7-year-old son manages to get through the gate. When the barrier between them disappears, the woman grabs Brown’s son, who immediately begins flailing to get her off.

This causes an instant escalation, as Brown shouts at the woman not to “put your hands on my son.” Brown hands the infant she was carrying off to her older child, before abruptly regaining her cool. Brown informs the woman that she intends to “call the police and I will have you arrested for putting your hands on a minor.”

The video ends soon after, as Brown begins dialing the police over the woman’s protests. The clip, uploaded to Brown’s page on Aug. 8, has racked up views over the last three days. It has earned nearly 5 million views in 72 hours since it was posted, along with hundreds of thousands of likes.

In a followup video, posted not long after the initial clip, Brown explains that the original video was filmed on July 6. Brown says the family is now embroiled in court proceedings with the woman and plans to return to court on Aug. 20 in hopes of prosecuting the woman.

A stranger at the pool filmed the interaction and later reportedly handed the video over to Brown and police, Brown says. Brown says that when police arrived, the woman attempted to flip the script. She allegedly told police that she was attacked by Brown, according to the followup TikTok, and attempted to get the officer on her side. Brown says the officer was initially taking Karen’s side “based on just the way we look” before viewing the video.

According to Brown, women from the community’s Home Owner’s Association—the Karen included—have been blocking “children who aren’t white” from accessing the pool. This reportedly spurred the person filming to begin recording.

Following the July 6 incident and the subsequent alleged court proceedings, Brown says the woman and two other women from the HOA have “constantly harassed” her landlord, “sending emails, spreading lies” about Brown and her family.

People in the comments stood by Brown and her decision to pursue legal action. They also lauded the bystander who filmed the interaction.

“When people ask ‘why are you recording instead of helping?’ Recording IS helping,” one commenter pointed out. “We know police are not likely to believe a POC over a Karen.”

Other users agreed and celebrated Brown’s restraint in not launching the woman “into space faster than Bezos.”

Numerous commenters noted that they wouldn’t have shown Brown’s restraint had a stranger touched their child. “You touch my child, I’m touching you,” one commenter wrote. “The end. I’m sure this woman did the right thing. But I have no faith in the criminal legal system. So justice would’ve been served that day.”

Brown says the woman was charged with misdemeanor assault on a child under 12. She and the Brown family, Brown says, return to court later in August. It is unclear where the incident took place.