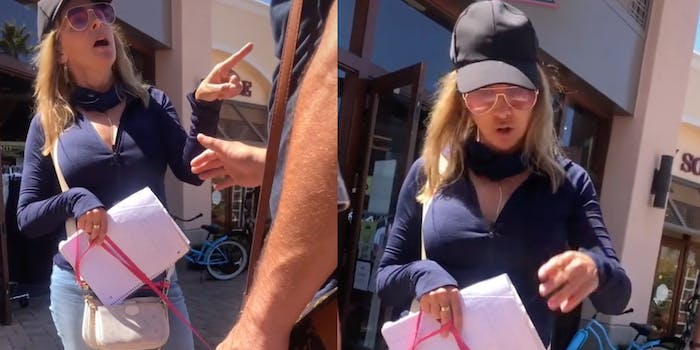 The man was waiting for his friends when the Karen came up to him to tell him his phone was a 'f*cking problem.'

A recent TikTok shows a Karen—who is also a self-proclaimed neuropsychologist—stopping people on the street for using their phones. She shares a conspiracy theory about cellphone towers and lectures them about how the “lines” and “blue waves” are frying people’s brains, the trees, and the air.

“Sorry for the language but just another day another karen! Felt the need to yell at us for being on our phones in public,” the caption for the video reads. The TikTok saga, posted by @scarns, is in two parts and has over 1 million views combined.

The first video starts with the woman telling the people she has stopped on the street to “just go die.”

The main person engaging in the argument with her is a man who replies, “Well, you’ll die before me,” pointing toward an apparent age difference between the two parties.

He continues: “You’re a neuropsychologist who knows nothing about fucking neuroscience. And you’re going to go around preaching misinformation.”

It is later revealed the woman is claiming to be some kind of neuroscientist, but it isn’t verified in any way.

“Guess what? I’m older than you so I’ve had a longer life,” the woman says. This elicits laughs.

“That’s how that works,” the man replies.

Many people in the TikTok’s comment section had something to say about this line.

“Shes older so she gets a longer life?? huh..I haven’t heard that science fact yet!” said @janicelauren3.

“That’s sad, cuz we weren’t exposed to this shit,” the woman says before the first video cuts off.

Shortly after the first video was posted, the TikToker shared a second video.

“That’s good advice. If you would’ve led with that instead of ‘I’m a fake neuroscientist,’ I would’ve listened,” the man replies.

“Again, what makes you an authority on anything?” he asks.

“Because I can feel it. You feel it.”

The argument continues back-and-forth with the man asking her what it feels like and her avoiding a direct answer by telling him she’s sorry he doesn’t feel it himself.

“It’s a simple question. Maybe I’m not feeling it and don’t realize it, so why don’t you tell me: In your medical opinion, what does it feel like?” he asks.

“I feel the ringing. Ringing in my ears. Do you feel ringing in your ears?” she says. The other group’s members all say no.

“Okay, I feel ringing in my ears, um, you can have numbness in your feet,” she continues.

“Well that’s never happened,” he replies. “What are the underlying medical problems? Think about that.”

Another member of the group responds: “Then you should probably move.”

“And the cell phone towers are pointed toward my apartment, but I’m just using myself as an example,” the woman says before the TikToker asks how this confrontation got started in the first place.

The man explains that when his friends—the woman filming and another woman who is shown chiming in from time to time—were in a nearby coffee shop, the Karen came up to him and started telling him his cellphone use was “a fucking problem.”

“[She said] my blue waves are harming other people,” he said.

One of the women in his group then says, “we should leave,” and the video cuts off.

“Honey, ringing in your ears is called tinnitus. 😂 Numbness in your extremities usually signifies poor circulation. You just need a doctor,” commented @meredith_bae.

“The ringing in her ears just means some other medical problems 😂😂😂,” said @arabellaxbella88.

Many commented on the “scientific” points of her argument as well.

“‘Protect yourselves.’ *mask isn’t on while in close proximity of strangers*,” pointed out @sandquezo.

Many said the entire conversation, not just the woman, was ridiculous.

“This conversation is the most [childish] thing I’ve ever heard!!!! You guys sound like your in high school debating about who gets more girls,” commented @valramirez05.

“I just drop them that’s all they understand they don’t know how to mind there business I’m two for two waiting on nexts one,” said @watchdogsecurity1.