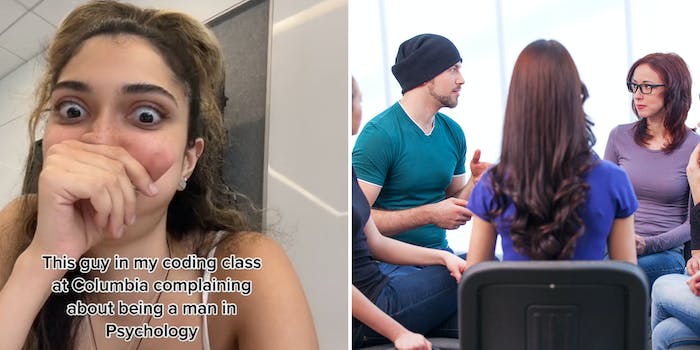 ‘There’s just like so many women to compete against’: Columbia student complains about how hard it is to be a man in the psychology field

'Does he realize how ironic that statement is?'

A woman on TikTok documented one of her male classmates at Columbia University complaining about how hard it is to be a man in the field of psychology.

In her bio, TikTok user Sarina (@psychandeducation) writes she is a psychology student at the Ivy League school and often posts about her life as a student. She has about 84,000 followers on the app.

One of her most recent videos, which has amassed more than 300,000 views, shows Sarina holding back laughter as her classmate complained during their coding class.

“Do you have any idea — in the psych field, there’s just like so many women to compete against, and there’s like no guys,” the man says off-camera. “It’s just really hard in this field to be a guy.”

In the video, Sarina’s eyes widen slightly in disbelief.

“Bro,” she says with a snort. “There’s like three girls in this class.”

She adds in a comment under the video, “despite being a woman-dominated field, male psychologists still have a higher income.” Sarina punctuated the comment with a clown emoji.

In the psychology field, gender pay gaps vary depending on the work setting, according to the American Psychological Association. The largest pay gap for psychology doctorates occurs in health services, where men earn an average of $39,648 more than women annually.

TikTok viewers were as dumbfounded as Sarina about the man’s complaint.

“It’s the lack of Self-awareness,” one viewer commented on the video.

“How can be men not get embarrassed in the middle of them talking,” a second viewer commented.

“LMFAO THE AUDACITY,” a third viewer wrote in all caps.

One viewer speculated that the man was upset that the female students were “outperforming” him, while others said he should try to collaborate with and not compete against his female colleagues.

“He’s just mad bc yall are outperforming him,” one user said.

“That’s so sad they see it as competition instead of an opportunity to collaborate and learn,” a second user wrote.

“‘To compete against’ HUH??” one viewer questioned.

Several TikTokers pointed out that many universities’ Psychology departments are dominated by men, and many prominent psychologists have also been men.

“I’m sorry but look at any psych department at any major university,” one viewer said.

“He says this even though I mostly read about men in this field,” another viewer said.

The Daily Dot reached out to user @psychandeducation via TikTok comment.