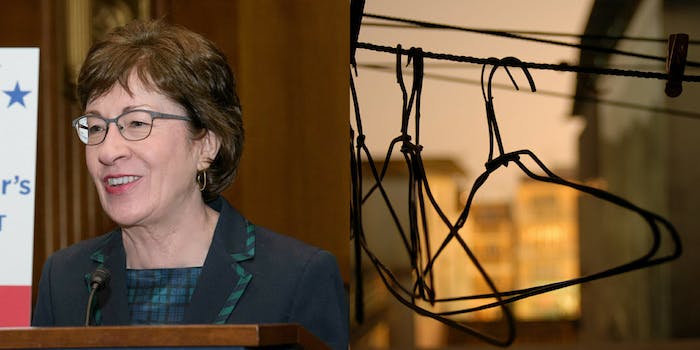 Reproductive justice advocates are relying on Maine Republican Sen. Susan Collins to keep an anti-abortion justice off the Supreme Court—and are sending her wire hangers for good measure.

Given that any Trump nominee who’ll replace Justice Anthony Kennedy, who announced his retirement announcement last week, will need 51 votes to be confirmed, advocates hope that Collins, with a history of respecting the “precedent” that the Supreme Court case set, will be the one to block “activist” judges with an agenda of eradicating abortion access.

Over the past weekend, Collins has attempted to reaffirm her positioning against anti-abortion justices, speaking to ABC and CNN about her confirmation disposition. But when questioned by Jake Tapper as to why she voted to confirm Justice Neil Gorsuch, with a known history of decisions against reproductive rights, Collins stated that she thought Gorsuch would respect precedent because he wrote a book about it.

Given Collins’ fickle feelings about anti-abortion justices, women are sending her hangers as a reminder of the types of unsafe abortions (such as those done with uncoiled wire hangers) that will continue should Roe v. Wade be overturned and abortion be illegal in the U.S. As studies have proven time and again, limited access to abortion providers does not curb abortion itself but does risk the lives of the people who do have an abortion illegally.

Even before her noncommittal comment about Gorsuch, women were committed to letting Collins know what would happen should she vote to confirm an anti-abortion judge.

“She’s old enough to know what’s going to happen, shame on her,” one person, who ordered a six-pack of #HangersForCollins, commented.

Others are encouraging protesters to use the symbol of the wire hanger on their correspondence to Collins, if they don’t want to spend the money on an Amazon package.

Also if you don't want to buy #HangersForCollins from Amazon, you can make your point with just a 3×5 card and a magic marker pic.twitter.com/Mu5zHfZ2ks

And some have instead gone all out, sending packages of 10, even 100 wire hangers.

#HangersforCollins Sending these to Senator Collins as a reminder of what her legacy could be. Yes, I used Amazon. Don't @ me. #SCOTUS pic.twitter.com/eSIKlqwX1K

I believe in, and will always fight for, a woman’s right to control her body. #HangersForCollins #WomensRights pic.twitter.com/yESUQXpjAX

Alaska Republican Sen. Lisa Murkowski may also be feeling the hanger heat, with some on Twitter calling for her office to also be included in the push against anti-abortion Supreme Court nominee confirmations.

#LisaMurkowski and #SusanCollins, we are counting on you to ensure that Roe vs Wade is not overturned. This law was settled decades ago!

“It may not do any good but continue to send coat hangers. It’ll show that women are watching whether Collins and Murkowski have their backs,” another tweeted.

It’s understandable why women are counting on Collins and Murkowski to support access to abortion: Both senators have a history of supporting women’s access to healthcare and appear to be the most likely to break rank from the Republicans, securing votes against all Supreme Court nominations (should all Democrats stay aligned). And it’s likely inconsequential to target male senators across both parties who seem the most and least likely to confirm an anti-abortion justice.

Then again, maybe not? The last time the two took a stand against the Trump administration a man got credit for their resistance.