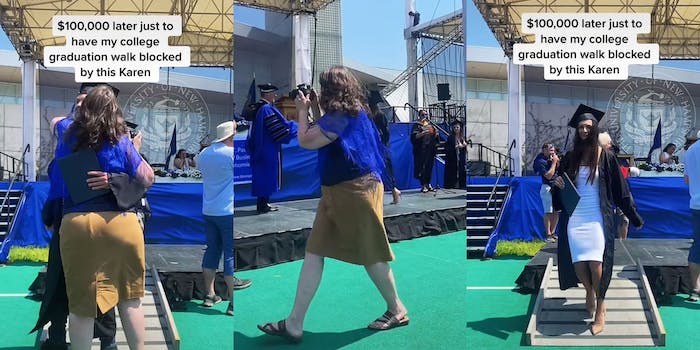 'All I see is a super stoked mom.'

A viral TikTok shows a woman dubbed a “Karen” seemingly ruining a college graduation walk for at least one graduate.

Vanessa (@nessieshawty) shared the video, which received about 1.1 million views as of Tuesday. Vanessa graduated from the University of New Hampshire, but her walk across the stage was blocked by another college graduate’s loved one.

In the video, the woman stands directly in front of the commencement stage and uses a camera to take photos of a loved one. As her graduate walks across the stage, she follows from off the stage, snapping photos as he walks. She then hugs him as he exits the stage.

Unfortunately, the hug blocks the line of sight to Vanessa, who walks right after the woman’s graduate. Whoever records the video couldn’t see the moment Vanessa accepted her diploma, although they did catch a second of her walking off the stage.

“$100,000 later just to have my college graduation walk blocked by this Karen,” the video’s on-screen text says.

The video sparked a debate among viewers. Some TikTokers said the term “Karen” wasn’t fair, calling the woman just a proud mom.

“She claimed a moment that she paid for. you could’ve done the same. All I see is a super stoked mom,” one viewer said.

“That’s not a Karen unless she purposely wanted to block you,” another viewer commented.

A third viewer wrote, “That doesn’t make her a Karen lol, she was excited thats it…”

The woman, according to some other viewers, displayed “inconsideration” and “entitlement.”

“Everyone saying it’s not a big deal sure but it was a very inconsiderate & entitled move … smh sit down like everyone else!” one user said.

“It’s a proud moment for all parents stand at your seat and take pics of your kid then sit so the next parent can do the same,” another user wrote.

Someone else said, “nah i feel you why she even in the way of everyone lol.”

“Some people think it’s all about them and have zero regard for others.. what if everyone got up and went to the front to take pictures ?” another user asked.

Some questioned the way the graduation walk was set up with such a small stage and how parents were even allowed to get so close in the first place.

“low-key the schools fault for having a graduation walk like that,” one viewer commented.

Another viewer said, “Since when is that even allowed. It’s never been allowed at any college graduation I’ve attended.”

The Daily Dot reached out to user @nessieshawty via TikTok comment.