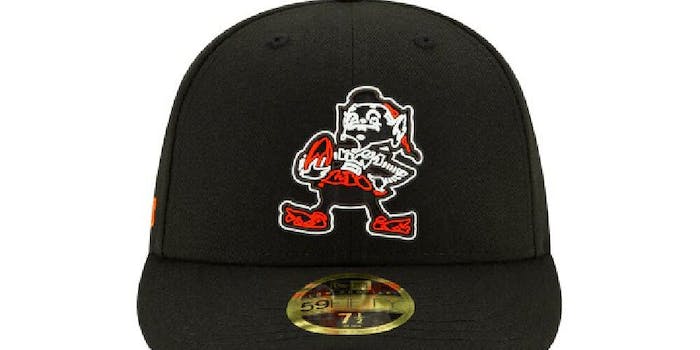 The Cleveland Browns unveiled a new hat design that is facing backlash for portraying blackface.

The hat features Brownie the Elf, a mythical character in Cleveland folklore that was adopted by the Browns in the late 1940s.

On Monday, Twitter user Everything Cleveland shared images of the new design of the hats, which are black in color, with a silhouette of Brownie the Elf stitched in white.

From a design perspective, it appears to be a white silhouette against a black textile. But for many, the hat appears to portray blackface, given the whole face was the color of the hat: black. The original color of Brownie the Elf is brown.

Daryl Ruiter, journalist and sports commentator, defended the design. “People will find anything to be outraged over or offended by,” he said.

But others say the blackface is hard to miss in the hat:

The Cleveland Browns did not immediately respond to the Daily Dot’s request for comment.

According to the NFL’s website the team’s merchandise, the designs have taken many shapes and colors over the years. Some have been against a brown background, with Brownie the Elf’s design in white with black borders.