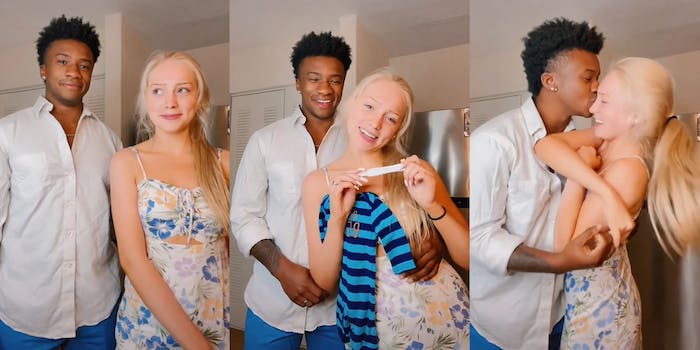 There’s a niche for just about every interest on social media, and it seems like new “sub-genres” of these niches are being created every single day. Some accounts focus primarily or comedy, or neat facts about a specific industry/line of work, some provide helpful makeup tips/tutorials, some provide recipes, and then there are accounts that sell a lifestyle.

TikTok really seems to love “Influencer couples” who document their daily lives being in love with one another. One popular couple on TikTok is Clara and Trey Bell, @claraandtrey, and they just announced in a lip-sync video that they’re expecting a baby together!

Here’s our surprise! It’s very early so be cautiously excited with us 💗 but we just couldn’t wait to tell y’all

The couple received a bit of press in 2021 after they revealed that they were married after about 2 weeks of dating. The NY Post quoted Clara as saying, “We spent every day together during that time and got married on the same day that Trey proposed the idea — we eloped. When Trey first proposed the idea of getting married, I was pretty on board. I was like, ‘That’s crazy,’ but we did it.”

Because of how quickly everything progressed, their family members didn’t attend the ceremony. They paid $200 for a ceremony in Panama City, Florida. The rings they purchased were under $5 and when they returned from their trip, many of their friends and relatives were not only shocked to hear that they were not only married, but that they were even dating someone in the first place.

Folks are also speculating that due to the nature of Clara’s test results, which she shared with her followers on the popular social media platform, she maybe be expecting twins.

Others criticized Clara for getting pregnant at such a young age. The CDC reports that the rates of teen pregnancies have steadily been declining in the United States since 1991, yet it’s a subject that seems to fascinate people nonetheless. Why else would MTV create not just a long-running series, but a bunch of spin-offs dedicated to this very topic?

Healthline reported that in general, it is healthiest for women to have children between “[their] late 20s and early 30s.”

The outlet continued: “This age range is associated with the best outcomes for both you and your baby. One study pinpointed the ideal age to give birth to a first child as 30.5. Your age is just one factor that should go into your decision to get pregnant. You also need to consider your emotional and financial readiness to start a family. That timing is unique for each woman.”

The couple has also joked about naming their baby “Taco” so they could be named after the popular fast-food chain, and if they are indeed having twins, the couple should name the other child “Tinker.”

Recently the couple launched a YouTube channel and debuted their first vlog on the platform.

The Daily Dot has reached out to Clara and Trey Bell for comment.