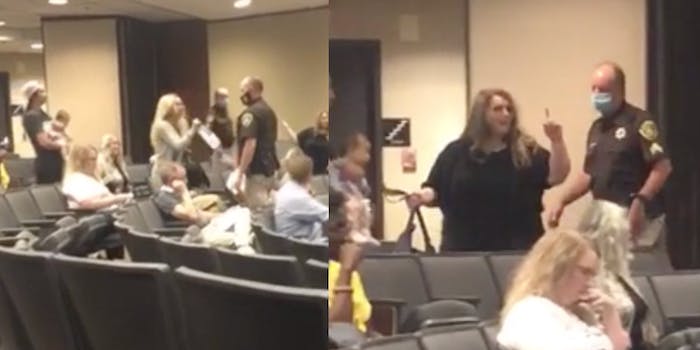 In the video, they band together to throw the ultimate tantrum.

Two women were escorted out of a city council meeting as they screamed about their freedom being “stripped away.”

A video that captured the incident was shared to Reddit on Tuesday and reportedly took place in Omaha, Nebraska, as the city’s officials discussed potentially extending the city-wide mask mandate.

The video shows a few attendees sparsely seated across a city council meeting room. Most of the meeting’s attendees are seen without face masks.

The video begins with an officer inching closer to an unmasked woman, who says, “You have no right to touch me. I have the right to speak and let you all know you’re in violation.”

As the officer tries to escort her out by holding onto her shoulder, she starts screaming, “Do not touch me. Do not touch me!” She then storms toward the door.

“You’re in violation,” she says. Another unmasked woman on the other side of the room starts to say something, though her words are inaudible at first.

After the first woman exits the room, a second officer approaches the second woman to also escort her out. As she walks toward the exit, she yells at the rest of the meeting’s attendees, “You’re witnessing it right now. You’re witnessing the stripping away of our freedom.”

According to Omaha’s 6News, the meeting was held to make a decision on whether to extend the city’s mask mandate past Oct. 20, the day it’s set to expire.

Douglas County Health Director Dr. Adi Pour cited a higher number of tests and fewer positive tests in the city since August but still recommended the mask mandate be extended, according to 6News.

Beyond the two “Karens,” most of the meeting’s attendees are reportedly against the mandate and admitted that they don’t even follow the current mandate, which is evident in the video.

Many reportedly said the mandate was unconstitutional and that it affected their mental health, according to 6News.

When responding to the video, redditors expressed exhaustion with yet another instance of anti-maskers citing the Constitution or their personal freedoms while simultaneously dismissing the severity of the pandemic.

“What exact piece of the constitution are mask mandates violating?” wrote one user. “Critical thinking doesn’t seem to be these people’s strong suits.”

The mandate, which went into effect on Aug. 11, “highly recommend(s)” a person wear a mask when social distancing is not possible.