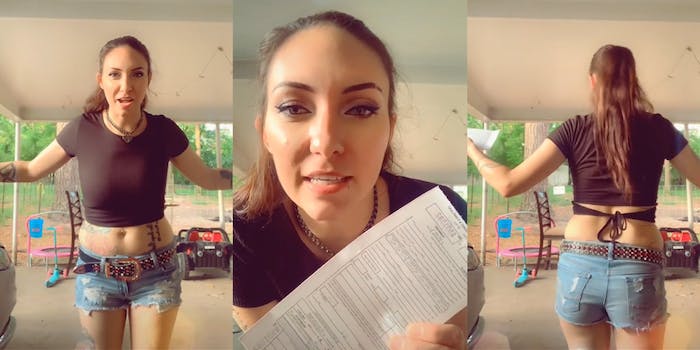 ‘It was hot’: Woman says she got a ticket for ‘indecent exposure’ while wearing a crop top and shorts

'It’s cuz you showed your wrists and ankles.'

A TikToker claimed she got a ticket for indecent exposure in Winnfield, Louisiana, while wearing a crop top and shorts.

TikToker Casey (@kazzi112) claims that, even though she was wearing clothing that covered her breasts, privates, and buttocks, she was cited for indecent exposure by a trio of police officers.

Casey’s first video on the topic has over 2.5 million views, with a follow-up storytime TikTok maintaining over 334,000 views.

In the first video, Casey reveals the citation and the outfit in question.

The outfit is a dark crop top and jeans shorts.

“At a family event, where there is alcohol being literally handed out for free, … three female cops came up to me and gave me a fucking ticket,” Casey alleges. “I live a mile down the road. They literally could have been like, ‘Hey, ma’am, could you put some clothes on?’ and I would have been like, ‘Yeah, cool. I’ll be right back.’ But no. They stood there and gave me a fucking ticket for indecent exposure.”

It is not clear which part of Louisiana law Casey is apparently violating.

Louisiana state law says that “any person subject to this code who intentionally exposes, in an indecent manner, the genitalia, anus, buttocks, or female areola or nipple is guilty of indecent exposure and shall be punished as a court-martial may direct.”

On a local level, the ordinance is as follows: “It shall be unlawful for any person to wear pants, trousers, shorts, skirts, dresses, or skorts in any public place or places open to the public which either intentionally exposes undergarments or intentionally exposes any portion of the pubic hair, cleft of buttocks, or genitals,” as stated by a Facebook post from the Winnfield Police Department.

The Winnfield Police Department was seemingly responding to Casey’s TikTok post, saying, “An unnamed citizen was cited for a city ordinance and has since taken to a popular social media site, blasting police officers. However, 3 female officers responded to various complaints about the person’s attire and the person of interest was issued a citation under the city ordinance.”

Casey says in the video, “all [her] bits are covered,” and there was no intentional display of undergarments nor “pubic hair, cleft of buttocks, or genitals.”

“I was sitting on a lower step, legs together and my husband sat behind me .. so no, I wasn’t flashing anyone,” Casey later wrote in a comment.

In a follow-up video, Casey shows a close-up of the citation, which was later verified by the Facebook post from the police department.

Casey says she was sitting and talking with her family, which consisted of her husband, her ex-husband, and her two children. She says three female police officers approached her and asked to speak with her. She says they then told her she was being cited for indecent exposure.

Casey says she protested, noting there were teenagers around her allegedly dressed in a similar manner. She says she also told the officers she could even go home and change, but the cops apparently refused, insisting on giving her the citation. Casey’s husband and ex-husband allegedly also questioned the police officers’ actions, at which point they were “basically told … to shut up and stay out of it,” according to Casey.

“I’m embarrassed at this point, because anybody who actually knows me knows that I have never worn anything like that in public literally ever,” Casey says in her video. “I’m usually the one that covers everything. But, it was hot…I was like, ‘I feel nice in this,’ so I decided to wear it. The first day I wear something revealing, I get cited for it.”

Casey says that she is seeking legal representation and plans on fighting the case. She is also collecting donations for her legal defense.

@kazzi112 Keep reporting and I’ll keep reposting!! You won’t shut me up! I did nothing wrong!!! #bs #faceit #offendedyet? ♬ original sound – Casey

“Fines range from $25.00 for a first offense to a maximum of $300, and the person may be ordered to perform up to 40 hours of community service. The citizen was given a court date in the Winnfield City Court, which is the proper venue to dispute any allegation. A citation, in lieu of arrest, is an allegation of an infraction, not an assumption of guilt,” the post reads.

It also included a statement from a department spokesperson.

“We, as public servants, will not engage in a social media war with any one or any organization, as it is improper and brings discredit upon this department,” the statement reads. “We also cannot comment on details of any case under investigation or pending court action.”

Commenters on TikTok mocked the police department and offered their support for Casey.

“It’s Louisiana it gets hot and muggy,” one user wrote. “What else are you supposed to wear?”

“It’s cuz you showed your wrists and ankles and this is apparently the fuxking 1800’s,” another added.

“Wait, so what do they think of bathing suits?” another questioned.

The Daily Dot reached out to Casey via TikTok comment and the Winnfield Police Department via Facebook message.