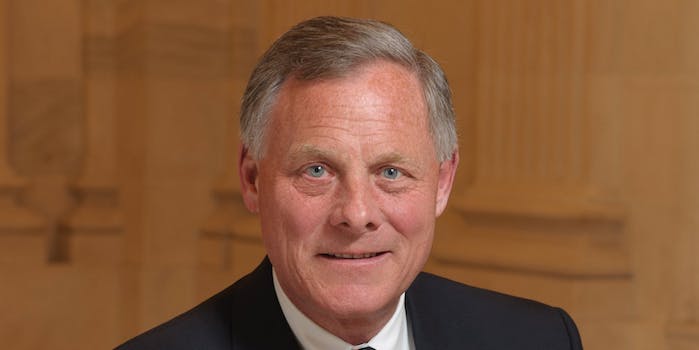 This senator played down coronavirus online, but was secretly warning donors about it

Meanwhile others publicly downplayed the risk.

Today, the world learned of a secret recording of Sen. Richard Burr (R-N.C.) privately issuing dire warnings to a group of well-connected constituents about coronavirus in late February, first reported by NPR.

His statements go much further than his contemporaneous public comments.

But around that same time, other senators had begun publicly sounding the alarm about novel coronavirus, COVID-19.

Given some of their statements, it’s possible more people in Congress knew what was coming.

Senators Chuck Schumer (D-N.Y.), Richard Blumenthal (D-Conn.), Lisa Murkowski (R-Alaska.), and others spoke of the threat posed by the virus in no uncertain terms.

Messages about the nation’s preparedness starkly differ by party, however. While Republicans congratulated President Donald Trump’s response and blamed China, Democrats were sharply critical of the president.

The Trump administration has been widely criticized for downplaying the risk, failing to ensure enough test kits were available, and testing too few people as the outbreak began.

Some Republicans, like Murkowski, were warning about it, though.

To his credit, Sen. Marco Rubio (R-Fla.) exhibited concern about the virus as early as February—though much of it was directed at China.

Burr’s private remarks in February indicate that representatives may have known far more about what to expect than they would publicly reveal until much later.

In a secret recording obtained by NPR, on Feb. 27 Burr reportedly told a small gathering of well-connected constituents to brace for the serious economic and societal impacts of coronavirus.

“There’s one thing that I can tell you about this: It is much more aggressive in its transmission than anything that we have seen in recent history,” he reportedly said to the group. “It is probably more akin to the 1918 pandemic.”

Burr urged those present to reconsider sending employees on trips to Europe, said that schools could close for weeks and people urged to stay home. He also said it was possible that military hospitals may need to be set up.

It would be nearly two weeks before the federal government warned against travel to Europe just two days before it was prohibited. School closures in North Carolina weren’t announced for weeks, either.

At the time, Burr was sticking to the party line: We’re ready, don’t worry.

To date, there have been more than a quarter-million confirmed cases and nearly 10,000 deaths due to COVID-19 worldwide. The United States is rapidly approaching 10,000 confirmed cases, though many believe the total is far higher.