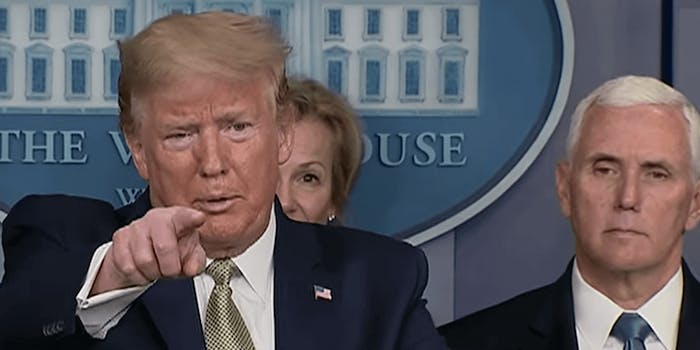 No, Trump didn’t say ‘people are dying today that have never died before’

People on Twitter are trying to spread a fake claim that President Donald Trump said “people are dying who have never died before,” in regards to the coronavirus (COVID-19).

Trump has held regular press conferences to provide updates on the developing coronavirus crisis. Although he has said some questionable things at the podium, like labeling COVID-19 as the “Chinese virus,” he did not make the claim about people dying.

Snopes reported that the phrase has circulated since 2008. It was first a false quote attributed to former Alabama Gov. George Wallace.

But that has not stopped people on Twitter from attributing it to the current president.

“A great Trumpism ‘People are dying today that have never died before’ fuck me what an Intellect @realDonaldTrump,” @AllanSkerratt tweeted.

“The president of “the free world” said :”People Are Dying Today That Have Never Died Before”… Do we cry or laugh at this? Or maybe be do both…” @OuissalHarize added.

And with something like this, it’s easy to see just how quickly it can spread.