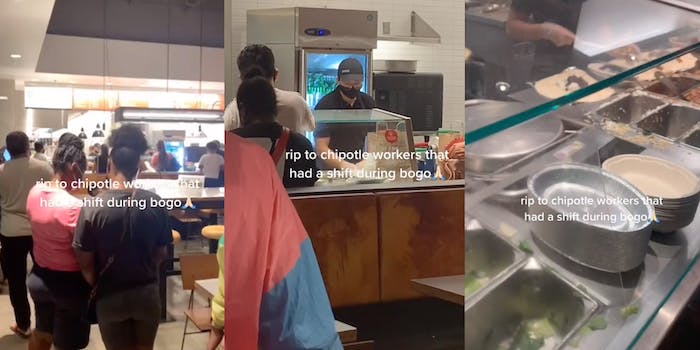 Chipotle offered a BOGO deal, and some frustrated workers said they were unaware the promotion was happening.

A buy-one-get-one-free deal for Chipotle customers who received their COVID-19 vaccine left some workers overwhelmed with orders for hours on July 6.

In a viral TikTok video posted by @aobussc, commenters from both sides of the counter shared their experiences during the BOGO event. Some who claimed to be Chipotle employees said they were busy their entire shift, while others who claimed to be customers spoke to how bad they felt for the workers putting together their burritos.

“I was down terrible for waiting in that long ass line,” the original poster captioned the video. “but a big (thank you) to the troops aka tonight’s Chiptole workers ily.”

It’s not clear whether this promotion was well-known among the company’s staff, according to a comment from @sexybitch5321.

“I felt bad all the workers at my location were saying they had no idea about it,” they wrote.

Another comment from someone implying they work for Chipotle appears to confirm this theory.

“I didn’t even know it was happening until I got to my shift and there was a line wrapped around the building,” @emilewaz.d wrote. “I didn’t leave the register from 3-10.”

Another commenter who claims to work at Chipotle thanked the poster for their video and caption, saying that they were working for seven hours straight since it was so busy.

The video starts with the poster waiting in the long line. It cuts to empty pans of beans, rice, and other ingredients. Some commenters wrote that they waited up to an hour to take advantage of the promotion.

This also comes as the nation is experiencing some of the worst labor shortages—which are reportedly hitting the restaurant industry the hardest—in recent memory.