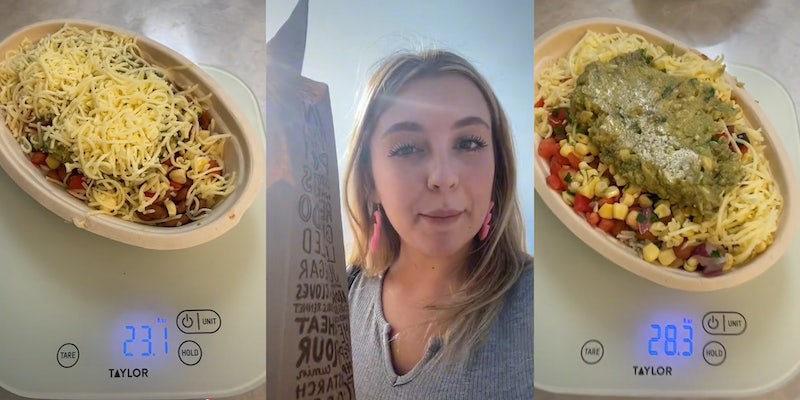 ‘Last time I ordered online was the last’: Chipotle customer tests ‘theory’ you get less food when you order online

'I took a picture every time and sent to customer service and got free meals.'

Lately, there’s been a lot of discussion online about Chipotle underfilling orders. One user on TikTok went viral after claiming they “caught” workers filling up online orders with half-spoonfuls. Another went similarly viral after offering their tip for getting a properly filled bowl. A further user even went so far as to weigh the meat from his online order, proving that it was, in fact, less than he was supposed to receive.

In general, the advice most people online give as it regards getting the most out of a Chipotle order is simple: Don’t order online. These people argue that Chipotle workers intentionally underfill online orders, leaving a customer with less food for their dollar.

Seeing this, TikToker Amanda (@amandaarmagostt) decided to put this advice to the test in a now-viral video. In a TikTok with over 400,000 views, Amanda orders the same meal online and in person, weighing each one after the fact to see which one has more food.

The results? The online order is in fact smaller, weighing in at 23.1 ounces in comparison to the in-person order’s 28.3 ounces.

“When you order in person, you get more food,” Amanda concludes.

In the comments section, users were not surprised by the results.

“Its not even a theory its a fact,” one user wrote.

“Can confirm,” another said. “I ordered in person today and mine was twice the size as the online order they were making after me.”

“Oh its absolutely true and I took a picture every time and sent to customer service and got free meals,” a third claimed.

Some alleged current and former Chipotle workers also chimed in, claiming they were asked to give online orderers smaller portions.

“I worked at chipotle this past summer before I left for college and they tell us to make the online orders smaller,” a commenter alleged.

“Chipotle worker here, it’s cause we’re required to give you less online cause management doesn’t think they’ll get complaints about online orders,” a second claimed.

Chipotle has not made an official statement on this common complaint, though Chipotle CFO Jack Hartung previously claimed that online ordering made portions more consistent.

“…Our portion sizes are much more consistent because there’s not somebody pointing at every single pan,” Hartung explained, per Eat This, Not That. “The crew will see just the way that a customer is looking at them and think, ‘Oh, I better put another scoop in.’”

Consistent or not, some customers say that comparatively paltry online orders have turned them away from the company for good.

One viewer of Amanda’s video wrote, “last time I ordered online was the last.”

Update 3:33pm CT, Sept. 15: In an Instagram exchange with Daily Dot, Amanda said she did not inform Chipotle about her experiment.

“No I haven’t contacted them,” she wrote. “I’ve contacted in the past for order mistakes, but I don’t think they made any mistakes here.”

She also said that commenters seemed to validate the results of her test.

“Based on the comments, I think it’s common to get more in person than online,” she said. “I plan on doing more tests, but I’m not doing it for free meals because I won’t complain to the company (I don’t want the workers getting in trouble). I do think it’s interesting how many people comment saying they’ve been told to serve less for online orders.”

We’ve reached out to Chipotle via media contact form.