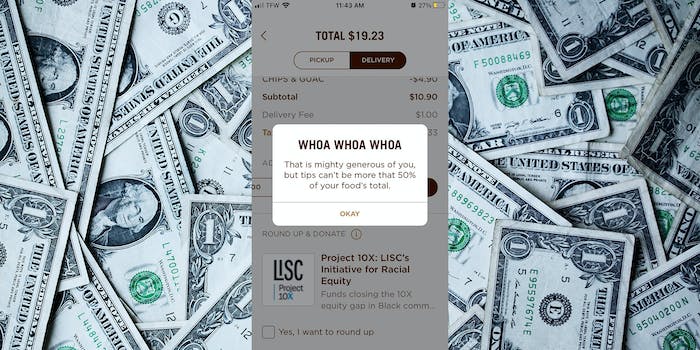 ‘We can’t have the peasant making any extra money’: Chipotle app stops customer from tipping driver too much, sparking debate

The Chipotle app prevented a customer from tipping their delivery driver more than half of the order total, which prompted debates online after it was shared to Reddit.

“Whoa, whoa, whoa. That is mighty generous of you, but tips can’t be more that [sic] 50% of your food’s total,” the notification said.

A user shared the notification on the r/mildlyinfuriating subreddit after they attempted to tip over $5.45 on a food total of $10.90, sharing that they only wanted to help out the driver.

The user told the Daily Dot they tipped the driver with cash to avoid the app limit. But the post led to speculation about why Chipotle and other delivery apps directly prevent large tips.

A few users echoed the original poster’s experience after one user claimed the post to be fake.

“It’s not fake. I just tried it on my Chipotle app and it pops up with the same (typo riddled) message,” one user said.

“This is real. I accidentally almost tipped $420 dollars instead of 4.20 and a similar pop up came up for me on ubereats,” another said.

Many responded with suggestions of other methods to correct user mistakes so drivers could still receive large tips.

“Seems like a ‘whoa that’s really generous but did (you) really mean to tip $x?’ would handle this, rather than flat out preventing it,” one user offered.

“Well we can’t have the peasant making any extra money that the company isn’t!” another countered.

One user suggested that such restrictions on tipping were utilized to prevent drivers from using delivery apps to cover up illegal transactions, such as the sale of drugs or prostitution.

“Yeah it avoids mistakes like that and also prevents shady shit like drivers using [delivery driving] as a cover and having their customers order some McDonald’s and $50 worth of bud and paying in the form of a tip,” they said.

Another suggested it was to avoid fraud charges and an expensive company investigation.

Some users defended the app’s preventative measure, sparking conversation over the effectiveness of confirmation prompts. Many users shared their own in-person work experiences in which customers blatantly ignored similar signage and questioning.

Another user shared a story of their wife accidentally sending a seven-figure wire transfer to the wrong account, even with two confirmation questions and another person’s approval of the wire transfer.

“No one reads ‘are you sure’ prompt,” they said. “Moral of the story, add 4,5,6 prompts or more! Users don’t care enough to read, comprehend (and/or) care about them.”

Chipotle told the Daily Dot in a statement that the preventative measure worked against user error and fraud.

“Similar to many retailers, the Chipotle app includes safeguards around tipping to avoid human error, as well as fraud, to ensure its guests provide their intended dollar amount,” Chipotle’s chief corporate affairs officer Laurie Schalow told the Daily Dot. “All tips through the app go to the delivery driver.”

The Daily Dot reached out to Uber for comment.