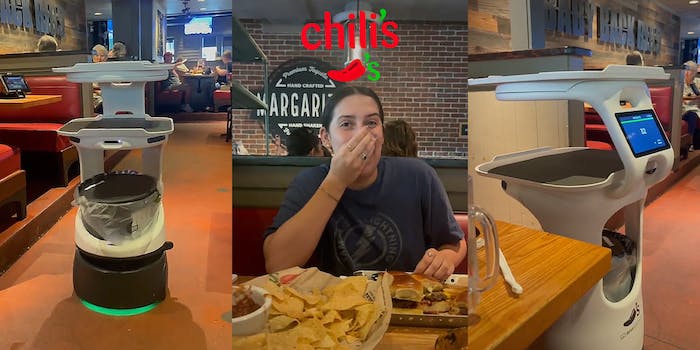 'It’s all fun and games before the robot becomes self aware.'

A woman recorded a video of a Chili’s robot singing happy birthday, which quickly went viral on TikTok.

The TikToker sounded shocked as she watched the robot approach her table.“@Chili’s Grill & Bar as if you didn’t already impress us enough,” Abby West (@allllllllllywestttttttt) captioned the video.

In the video, West is eating with friends when she notices the robot heading to their table. The robot glides to the table, spins, and exclaims, “We heard is your birthday! So, we’re going to celebrate with you, Chili’s style! Let’s do this! On three!” The robot proceeds to count down to three and sing Happy Birthday.

According to Chili’s website, Rita the Robot is a new server that was created in early 2020. Rita has many roles, including hosting, food running, and singing happy birthday. She was originally located in one restaurant, but after passing multiple tests, she’s in over 51 locations.

The video has over 133,000 views, with varied reactions from commenters.

“What corporate marketing intern thought this was a good idea,” another one commented.

“It’s all fun and games before the robot becomes self aware,” a user said.

Commenters also discussed the robot’s voice, noting it was similar to Barbie.

“Barbie?? Is that you?” commented another.