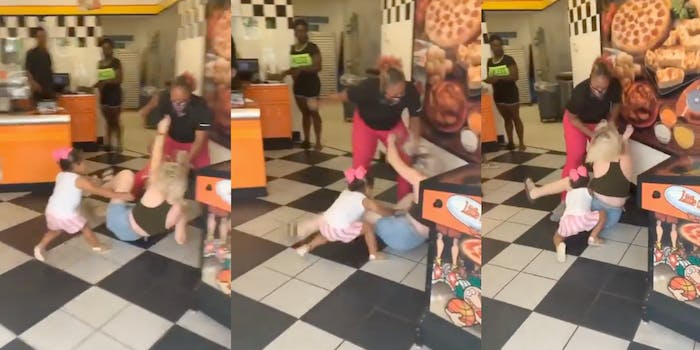 ‘This is sad’: Viral video shows small child trying to intervene as mom gets punched, stomped on at Little Caesars

Police are searching for a woman who allegedly assaulted a mother in front of her small child at a Little Caesars Pizza on Monday.

A witness captured the incident in a now-viral video showing 22-year-old Emily Broadwater with a bloody nose and screaming for her daughter after being punched, stomped on, and dragged across the concrete outside the Georgia establishment.

The Richmond County Sheriff’s Office report, published by Augusta Crime, stated that there is a warrant for battery out for 25-year-old Brittany Kennedy’s arrest, but police were unable to locate Kennedy at her home in Augusta. A wanted poster asking for anyone with information about Kennedy’s whereabouts to contact the sheriff’s office has been widely circulating online. She is not in police custody, the sheriff’s office told the Daily Dot Wednesday afternoon. The office could not give more information about potential charges, but the incident report stated that Broadwater does “wish to prosecute.”

People on social media have been especially vocal about the apparent lack of action from the bystanders—a person videotaping, several Little Caesars workers, and restaurant patrons.

“Why are people just fucking recording on their phones? Come on, man!!! It pisses me off on the world we live in!” writes Twitter user @_omgitsmatt.

Those who have seen the video, however, seem the most horrified by the fact that Broadwater’s tiny daughter is seen trying to protect her mother, even coming close to getting in the middle of the fight before a witness yells, “Move the baby! Move the baby!” which another witness proceeds to do.

Responding to the video posted by @NoPauseTv on Twitter, user @DJHere4 writes, “I don’t give a shit what adults do to adults but when you act this freaking violent and ignorant in front of your children how are we to ever better our society? I’m disgusted in every aspect of the word.”

“I AM THE VICTIM. All I did was help a friend out with his kids while his baby moms was locked up. She has been harassing me for weeks now. All I’m saying is that I never caused any harm to her or her property or her children like she had mine,” she wrote, per Too Fab. “Now imma go back to living my life and taking care of my daughter.”